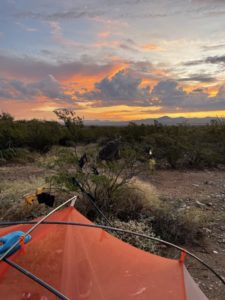 Today’s hike from Hachita Peak to near Vista Tank was interesting, to say the least! So was last night. As I was setting up camp a few miles shy of my goal, if you recall, I’d messaged Jeffery about possibly dropping off water for me tomorrow, as I was pretty low, and the next water cache was far away.

He replied, “Hold on,” but then I heard nothing. It was starting to thunder and lightning, so I messaged him back that I’d touch base in the morning, as I had to turn off my Garmin to save juice.

Well, apparently he thought I was in dire need. So several hours later, as I lay in my tent sleeping, I saw headlights. I thought maybe it was the Border Patrol seeing who I was. Nope, it was Michael and Jimmy from the Hachita Store, which helps hikers and partners with Jeffery. Jeffery said I was in need, and all three were all looking for me!

I was embarrassed that everyone was looking for me at 11:30 at 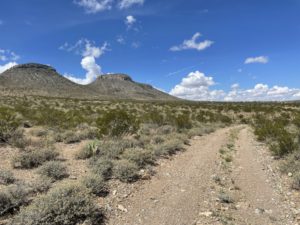 night, but since they’d come all that way, I gratefully took four bottles of water and two Dr. Pepper’s from them, giving them some cash for their efforts. (Always thank your trail a angels!) It was really heart-warming to know people knew I was out here, and cared about my well-being.

Heading Out from Hachita Peak

The rain, incidentally, was annoying. The monsoon season is supposed to be over, but it rained. Not a ton, yet a lot of water got inside my tent. I had a puddle in spots! I think that was partly because I couldn’t properly stake out my tent in this dry earth. I tried having the vestibules held open with rocks, but it didn’t work.

My tent dried out reasonably well while I ate and packed up in the morning. Still, it slowed me down, and I didn’t get on the trail until 8:45 a.m. Not good when I had two miles (3.2 km) to make up/add to my day.

The first several miles were nice, because you followed this wide, gravel road. No need to look for markers and blaze your own path. That slows you down SO MUCH. Jeffery left extra water for me at the road crossing I’d specified in my Garmin message last night, and I topped off my water supplies. It was so nice not to have to stress about water!

Eventually the trail got off the gravel road at a spot where Jeffery, I’m guessing, left even more trail magic – several bottles of water and some snacks. Super nice! I took a few dry bars from the snack cache, since my chocolatey ones were all melted and hot and disgusting.

Winding Through the Flats

This part of the trail was nice, because you had an actual trail to follow (for the most part), and it wound through some pretty 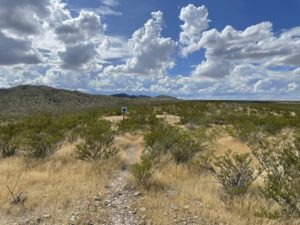 vegetation and was mostly on soft sand. About mid-afternoon I saw a man walking toward me. Jeffery? Nope, it was Jimmy/Jimbo from last night (I wouldn’t have known him by sight, as it was dark out last night).

He was working in the area and thought I might be coming on the trail around this time, so he was looking for me. Jimbo gave me more water, took my garbage and said he could shuttle me to Hachita for a shower/camping and then drive me back to the trail the next morning. How kind!

Unfortunately, I’d planned to hike past this area before stopping for the day, so I declined. However, I’m going to see if he can slackpack me on Thursday, when I have an 18-mile (29 km) day. I’d love to hike with just a gallon or two of water, plus snacks. I hope it works out.

After leaving Jimbo, the trail started climbing up and down these hills. It was definitely harder than the flat section I’d just left, but not too terrible. I was looking forward to the water cache, which I knew was near a road crossing. Crossed the road, checked my app and saw I’d missed it by a quarter-mile (.4 km). Grr! It was hidden off the trail, so I didn’t see it.

Back I went to fill up, which cost me nearly an extra half-mile (.8 km) round-trip, which I couldn’t afford. I thought if I hiked 2 miles (3.2 km) past the water cache, I’d be roughly where I wanted to end, or maybe a half-mile shy. Not bad.

So just before the 2-mile mark, I saw a great camping spot near a tire filled with fresh, clean water. I stopped and set up camp, getting some water from the tire to use liberally in cleaning up. Normally I have to conserve water, so I use the bare minimum to get clean.

Once again I heard thunder, and it began to rain before I had a chance to eat. Sigh. This shower was short-lived, but my gear is all over the place, which means it will take me longer to get ready tomorrow. Plus, I saw I actually stopped more like 2 miles (3.2 km) shy of my goal, so once again I’m behind. Rats.

This trail is hard in the heat, with little to no water!

After all of this rain, I recommend having some chamois cloths on you to soak up rain, sweat, bathing, etc.