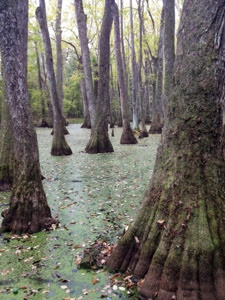 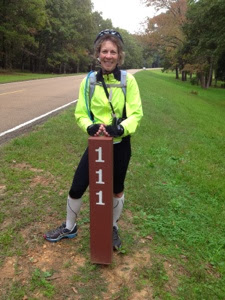 Today we were biking from Clinton to Kosciusko, Miss., a trip that would take us around Jackson. Before we set out, we’d heard from other cyclists that biking around Jackson on the Trace was “white-knuckle biking.” It’s called that because so many locals use the Trace to get to and from work quickly.

Well, there’s one section around Jackson where a recreational path roughly parallels the Trace. And parkway materials advise using that path when the traffic is bad. Luckily, we were heading out of town at 7:30 on a Sunday morning, so the traffic wasn’t that bad. So while we could have used the recreational trail, we opted to stay on the Trace for authenticity’s sake.

Anyway, I’d planned a day of about 75 miles (121 km) of biking, which would be the farthest Ed or I had ever biked in one day. Although we would have preferred lower mileage, you have to go where the lodging is. Fortunately, there weren’t too many historic or scenic stops along the way. So, we didn’t have to stop as much as we had in previous days, and we could keep biking.

From Clinton to Kosciusko

As we pedaled, the first highlight of the day was hitting mile marker 100 (161 km) – triple digits! The next thrill was reaching mile marker 111 (179 km) – one-quarter of the way completed! In between those two mile markers, we saw the beautiful Ross R. Barnett Reservoir, which is 50 square miles (80.5 km), I believe. There is a pretty overlook here. But it was cloudy at this point in the day, so the view wasn’t as beautiful as I’m sure it could have been.

Next, we came upon one of my favorite stops to date, Cypress Swamp. As its name implies, it’s a cypress swamp. Well, the swamp was just gorgeous (see photo in slideshow). And there’s a little trail winding around a small portion of it that was fun to explore.

After the swamp, it started sprinkling on and off. Since the road was pretty flat after the reservoir, and we didn’t have many scenic or historic stops, we figured we should try and knock off the miles. After all, what if the rain increased? So we began pedaling pretty quickly. Then I tucked behind Ed to try drafting. And it worked! We got into this groove and really pounded out the miles.

At one wayside, a mini bus pulled up. Out tumbled some folks from SATW, who had come from the travel writers’ conference like we had. The group was on a post-conference tour called “Cities Along the Trace” and were exploring a handful of cities from Natchez to Tupelo.

Around 3:30, Ed and I reached our destination of Kosciusko. Conveniently, Kosciusko has a great Visitor Center that sits right off the Trace. Here, we learned all about the great Polish General Tadeuz Kosciuszko, after which the city is named. But the city modified the spelling by dropping the ‘z.’ Anyway, Kosciuszko was a military genius who helped the colonists beat the British in the Revolutionary War. In addition, he built the fortifications at West Point.

Tonight we’re staying at the Maple Terrace Inn, a nice B&B in the heart of downtown. And we got pizza to celebrate our record mileage.