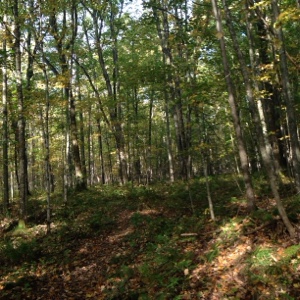 I love the western end of Mondeaux Esker. Had a great hike there this morning, then headed into Jerry Lake.

The first part of Jerry Lake got off to a poor start. I was following the blazes, and then they stopped in this area where everything and nothing looked like it could be the trail. After bumbling around for a while in different directions and coming up with nothing, I hiked back out and skirted that initial section. After that, everything was perfectly marked.

Ran into a group of young men camping. I asked if they were a bunch of friends out for a fun weekend. There was a long pause, and then one guy said, “Not really.” Hours later my crew person, Doug, found out the story from another person on the trail. Apparently there’s some alternative school for kids who have gone through some kind of trauma. As part of the school, they spend days, weeks and even months camping 24/7 as part of the therapeutic process. Interesting!

Lake Eleven was another gorgeous stretch of trail. So perfectly marked, and just a delightful not-too-hard, not-too-easy trail. I hustled at the end of the day to hike the final 3.8 miles, and hit the highway just as the moon was rising.