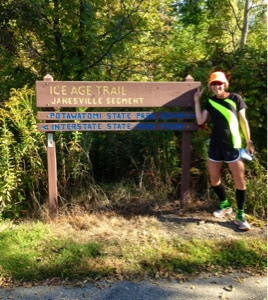 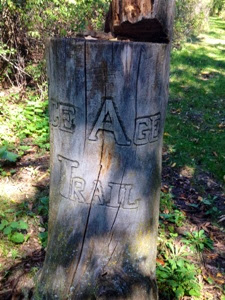 JANESVILLE, BABY! Today was so exciting because I’m officially headed north now. I started the day on the intriguingly-named Devil’s Staircase, a ery technical trail clinging to the side of a steep bluff along the Rock River. You need to watch your footing, but the views are gorgeous.

From there, the Janesville segment winds through town along the Rock River on recreational trails, then leads you out the east end, again on recreational trails. I have to say, I was quite impressed. Even though Janesville is close to Madison, I haven’t been here that often. And I never dreamed the city would have such a great trail system. Everything was very well blazed as well, other than a few spots where there were new connecting trails being constructed. It was a lovely way to start the day. Best of all, Terie and I found a sign proclaiming the Eastern Terminus a mere 324 miles (521 km) away (and the Western Terminus 776 miles [1,249 km]).

Heading Out of Janesville

The trail between Janesville and Milton was a cool little dirt path tucked into some woods between homes and the road. I wonder how long that’s been there?

The Milton segment was nearly five miles (eight km) long, and led you all over town. Highlights were seeing the famous Underground Railroad home and the former Milton College.

We had to cross the railroad tracks at least three times, and I kept hearing train whistles. At one point I saw a train chugging up the tracks and decided I wasn’t going to wait for a train. So I sprinted on my sore feet and beat it.

Vying with the train whistle blasts were what sounded like faint strains of a marching band. I thought I was imagining it, but later I passed the high school and I could hear their band playing. It made me realize I haven’t heard music in a month. Wow.

I hiked nearly the entire Storr’s Lake segment, only to be turned back by a huge flooded section in a prairie area. I tried to hike around it, but it was wet everywhere, and with my ailing feet, I decided it was better to hike back out and walk around it. Note to the IAT folks: a boardwalk here would be great.

Near day’s end I had a long-ish connecting route, with one fun occurrence. Must be the day for music. At one point during my walk, I spied someone in a white top with black pants standing in the middle of the road, singing. It was beautiful. I assumed it was Terie, a fantastic singer, singing me some song of encouragement (she was wearing a white top and black pants). When I got near the person, it was a young girl singing with headphones on. How great that she was standing outside, sweetly singing in the sunshine. It sort of made my day.

Finished up with the Clover Valley segment, a delightful hike through woods and prairie along a creek.

The only downer for the day is that my infection/cellulitis isn’t getting better, so I had to fill yet another antibiotic prescription – the same medicine as the first one I had. It got rid of the infection quickly, but had some nasty side effects. Let’s hope this does the trick.

Tonight I’m staying at Hamilton House in Whitewater, another lovely B&B that’s very close to the IAT. The inn caters to hikers and cyclists, as those are their typical guests. So they have lighter, healthier breakfasts, for example.

Can’t forget to mention that Tom Harding stopped over tonight. Tom is my deep-tissue massage therapist and acupuncturist – very talented – and he came over from his home in Edgerton to give me a massage. Boy, did my body appreciate that!