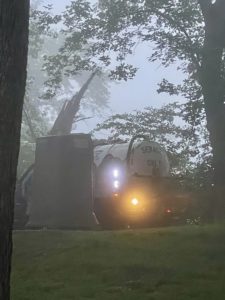 Today’s hike to Devil’s Alley nearly killed me. OK, so that’s a bit of an exaggeration. But it did a number on me mentally. It wasn’t the day in and of itself, but rather the culmination of hiking so many, many days in temperatures around 90 F (+32 C), with high humidity and a too-heavy pack. But back to the beginning …

I woke up this morning to a dense fog – not the most welcome sight when everything you have is already damp or downright wet. The one happy sight was a sewage truck pumping out the porta-potty at my campsite! The truck not only pumped everything out, but blasted the entire inside with a nice-smelling antiseptic. It then trundled up the road northwest-bound, so every porta-potty I hit today was freshly cleaned!

Making My Way to Devil’s Alley

The first half of the day passed uneventfully. I saw a few cyclists, although not too many. It got sunny, hot and humid once again, and I used the chamois Ed gave me to keep soaking up the sweat soaking my shorts and shirt. Soon the chamois was soaked, too.

Round Top Cement Mill, which provided cement for the Washington Monument and U.S. Capitol, among other structures. I love such random trivia!

With about 10 miles (16.1 km) to go, I decided to stop briefly every mile to take off my pack, stretch and rejoice at another mile down. But after just one or two such stops, the mosquitoes suddenly appeared in droves.

Now, in three weeks of hiking I haven’t had any issues with bugs. So when I offloaded items from my pack in Williamsport, I ditched my Sawyer Picaridin bug spray (although I did keep the Thermacell for camp). Of course they appeared now! I was almost in tears as I was swarmed by mosquitoes, soaked, hot, sweaty and still had several hours to hike. I wanted someone to transport me away from this trail, stat.

A cyclist came up then, asking a logistical question. He ended up giving me some bug spray, and not too long after that the mosquitoes totally disappeared.

I’d been toying with the idea of stopping a few miles/kilometers early today to stay at a private campground. But when I came upon it, the only thing extra you got for your $20 was a pit toilet bathroom in lieu of a porta-potty. No showers. So I trudged on and eventually reached Devil’s Alley. 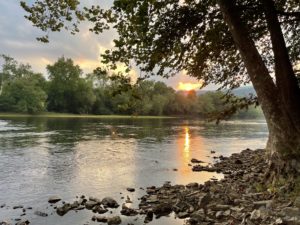 Two men were already at the campsite, Chris and Zach. The campsite had very easy access to the Potomac, for once, and a working pump. The men both worked for REI, so we had some interesting talk. There was a lovely sunset tonight.

I’m worried about tomorrow, though. I’m supposed to camp one final night before staying at a motel in Cumberland, but it’s supposed to storm around 4 p.m. If everything gets even wetter than it is, Thursday’s hike to Cumberland will be utterly miserable. And wet gear is heavy gear!