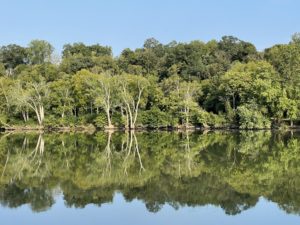 Today’s hike from Big Woods to Williamsport was exceptionally hard, but I’m not sure why. I felt well-rested this morning and made sure to eat more than I usually do. But I was wiped out just halfway into the day. To backtrack a bit …

I woke up before 6 a.m. to get an early start on the day. Today the temperatures were supposed to hit 90 F (+32 C), plus I had an extra few miles to hike due to a detour. So instead of a shorter day, I’d have a typical one. So I’d broken camp and started hiking before 8 a.m.

The first half of the day went fine. It was cool and shady along the path. Surprisingly, there weren’t all that many people out. A few miles into my trek, the path went along an area where the 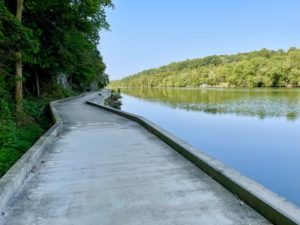 canal disappeared. Apparently it was simply too rocky here to create a canal, so donkeys pulled the boats in the (calm) river between two canal points.

It was around this area that there was a 3-mile (5 km) detour, which added those extra miles to the day. The detour was fairly hilly, so that didn’t help. Still, I felt OK.

And Then, the Crash

I’m not quite sure what happened, but sometime in the afternoon I just felt sluggish and exhausted. Maybe it was because one of 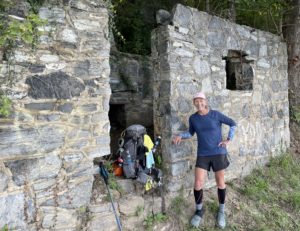 the campers – a cyclist with a portable scale – weighed my pack this morning, and I discovered it weighs 35 pounds (15.9 kg). And that’s without water! You should only carry 20 percent of your weight, and that’s just 24 pounds (10.9 kg) for me.

But I don’t think that’s it. Anyway, as I mentioned, I ate a lot more, but it didn’t help. Maybe it’s just my advancing age!

So I mentioned the pump situation at campsites. If a well tests bad, the pump handle is removed until the water is good again. So far only the well at the Huckleberry Hill campsite was bad. 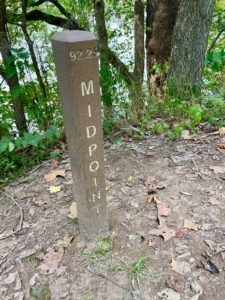 Woods campsite, which was actually a bit before the campsite. And this pump’s handle was SUPER hard to pump. I was jumping on it with every pump and gave up after filling just half a bottle. Why expend so much energy when there would be pumps down the road all day?

I’m sure you know what’s coming. Every pump after that one was bad, with the handles removed. I milked my one bottle of water and got a little bit from the Potomac to filter, but it was full of sediment. Not wishing to ruin my new Sawyer water filter, I made do with one bottle.

One of the biggest happenings of the day came when a family I’d seen earlier was on the trail ahead of me, stopped. They were looking back at me, and I wondered if I’d dropped something on the trail that they were going to give to me.

As I approached, with my eyes on them, I suddenly spied something on the trail. It was a snake wrapping its body around a squirrel and squeezing it to death! I gave a little scream and ran away from it, which caused the snake to let go and slither into the grass.

The family had seen the snake attack the squirrel and had pulled over to give their young kids a living science lesson. Apparently, I ruined it for them! Oh, well. That’s life, too.

Snuggling in at Williamsport

I got to my lovely B&B, Bay Farms, mid-afternoon. That’s amazing, considering my pace and the miles. I’d hoped to have a leisurely afternoon, but that’s not how it went.

I showered, which was so incredible! But I only had (hot) rain pants and a thick shirt to put on while I waited for the owner to arrive and show me the laundry facilities. I also had to wash a few non-clothing items, open a box of food I’d mailed ahead, prepare things to mail home, etc.

Went to a gas station to pick up more Smart Water bottles, since mine were pretty used, but they didn’t have any. Got some pizza, salad and beer at a local pizza place, the only restaurant open in town.

There are several other couples here, but I didn’t have time to chat because I was busy updating these trail journals. Also discovered my gaiters promised by Amazon were late, so I had to cancel the order. But my shorts from Maura arrived, so now I have a back-up pair. Phew!