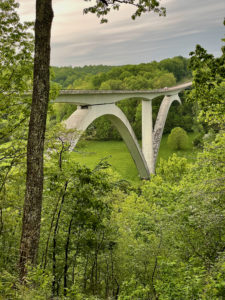 Today was the big day: hiking to the Natchez Trace northern terminus. The rain forecast kept changing, but before we turned in for the night it said the rain would arrive around 10 a.m. So the plan was that I’d get up at 4 a.m. so I could start hiking at 5:45 a.m. If my leg (and luck) held up, I’d finish right as the rain was arriving.

Amy decided to sleep in a little more, then meet me somewhere up the trail to help with car shuttles and, hopefully, hike the last few miles.

Striking Out for the Natchez Trace Northern Terminus

I was fine getting up early. I’d set up my tent under the restroom overhang in case it rained overnight. It didn’t, but this light right over my tent started blinking on and off all night, preceded by some clicks. Why haven’t I learned there are outdoor lights at these restrooms?!

Anyway, I headed out in the dark, driving my car to the next pull-out, then doing a 3-mile (4.8 km) out-and-back southbound, picking up those last few miles I had planned to do yesterday. From there, it was northbound to the terminus! The weather was cloudy and cool, which is actually great hiking weather.

Meeting Up with Amy 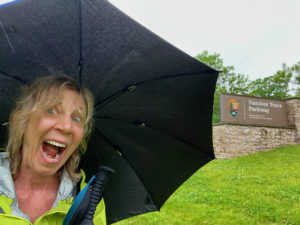 Shortly after I was heading northbound, Amy drove up. She wanted to take photos at the famous Double Arch Bridge, just south of Nashville, but she’d confused it with another bridge. She also had an updated forecast: the rain was moving in sooner than 10 a.m. We drove to the Double Arch Bridge which, sadly, is a spot where a lot of people commit suicide. There are warning signs posted on the bridge, plus a call box for help. So tragic! After I took pix of this iconic bridge, we struck out together, northbound. But when it started to sprinkle, she turned around back toward her car. I trudged on toward the northern terminus. And then, a huge gift.

A Gift from the Natchez Trace

So, the Natchez Trace is billed as a 444-mile parkway. I knew from our 2013 thru-bike that the mile posts end at 442. There is no northern terminus marker, either. Just when the rain started to get heavy, and I thought I had another 4 miles (6.4 km) to go, I reached the terminus. Or what I assume is the terminus. I saw a twin structure to the one at the southern end, proclaiming the start of the Natchez Trace Parkway. It was at mile post 440. This is the only thing akin to a northern terminus sign, and since there is no mile post 444, I figured this is the end. So I snapped some photos in the rain and checked off another National Scenic Trail. Woot, woot!

P.S. To celebrate our accomplishment, Amy and I headed to The Loveless Cafe, which sits just off the parkway. It’s the place to go when you start or finish the Trace. Why? Well, they have incredible fried chicken and biscuits, for one thing. But after doing some digging, I learned that nearby business Trace Bikes used to have a storefront at The Loveless, which is likely where the cyclist traffic began. As more and more cyclists noshed at the Loveless while their bikes were being fixed or after shopping there, it became a tradition. A mighty tasty one, I might add!

*Why is this number different? The sections of National Scenic Trail are longer than the parkway. Plus, the parkway’s northern terminus marker is actually at mile post 444. Don’t even try to figure this out!

I really love my Vivobarefoot water shoes, which double as camp shoes. Get yours here!