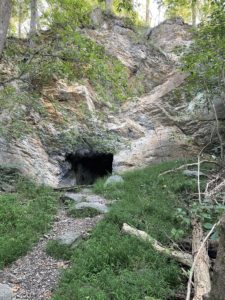 I got up and on the towpath by 8:30, which is kind of late. I suppose it was because I stopped to talk to the group of guys from last night, plus a woman named Sam (also in our camp) and a couple from Portland who camped right next to me. The guy in the couple, Rusty, gave me his leftover hamburger from dinner because he couldn’t bear to throw it out. Ha! Can’t believe I took it. I just cut off where he last ate it and had a nice, tiny burger for lunch.

Anyway, the day dawned clear and lovely. The towpath initially was pretty much the same. I wish I had better views of the river. What I can see is lovely, but there is often so much brush in the way it ruins the view, and any pictures.

Making My Way to Big Woods

Eventually there was some interesting, rocky terrain to my right, on the opposite side of the canal. As in a rocky cliff. It appeared and disappeared throughout the day. Once I saw a cave in the wall.

As you might expect, being a Saturday, there was a lot of activity 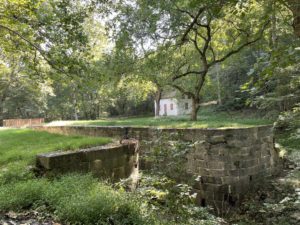 along the trail. Mostly cyclists, but some walkers and people out with their dogs.

I’d hoped to hike into Shepherdstown to grab some lunch and maybe some portable beer or wine for tonight, but the town was 1 mile (1.6 km) away. With the return trip doubling that mileage, it wasn’t worth it.

Most of the day I didn’t have WiFi, so I couldn’t listen to podcasts or music. Boo. I’d also planned to stop at Barron’s, a popular home at mile post 77, where the owners run a C&O Canal museum and sell candy, ice cream and snacks. Alas, it was closed – I’m guessing due to COVID. 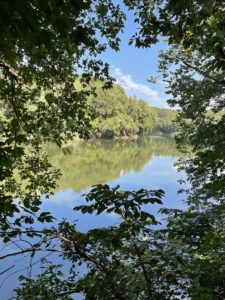 Tomorrow is supposed to be a shorter day, but a construction detour is adding 2 miles (3.2 km), so it’ll be nearly as long as today. Waa!

Tonight I’m in a campsite that’s slightly off the road. The pump is one-tenth of a mile (.2 km) away, which is odd. The pumps are always right at the campsites. Two women were here when I arrived. They’re very nice, and offered me some of their apple cinnamon brandy. Another couple with a dog biked up while we were making dinner.

As always, it will be interesting to see what tomorrow brings!