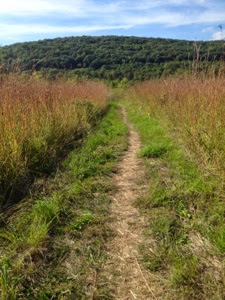 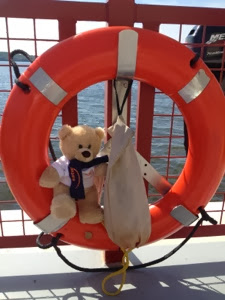 Today my goal was to get through Lodi and its three trail segments. And it turned out to be quite the day, characterized mainly by hills.

It was fun to start in Devil’s Lake, since I’ve run and hiked almost all of the trails here before. And Devil’s Lake is such a great state park – it’s Wisconsin’s most popular. But Devil’s Lake is incredibly hilly, and my quads weren’t too happy, especially going up the West Bluff Trail and the Balanced Rock Trail.

I was able to hike a tiny bit of the Merrimac segment, but the bulk of it was closed due to temporary logging. Gibraltar was another hilly segment (up a huge hill, down a huge hill), while the short Groves-Pertzborn segment gave me a bit of a respite, even though it was hilly, too.

The City of Lodi segment was interesting. You walk up a gargantuan hill in the city that’s several blocks long, then hang a right and slip onto a trail that runs behind the middle and high schools. The trail ends in the high school parking lot. Then you have to walk through the city of Lodi. I did enjoy gawking at all of the homes.

The last two trails for the day were Eastern Lodi Marsh and Lodi Marsh. Marshes are generally low-lying, so I figured these would be flat, relatively easy trails. WRONG.

Eastern Lodi Marsh was insanely hilly. The trail wound through forest and farmland; never saw a marsh anywhere. Lodi Marsh was a “lollipop” loop (go up the stick, around the lollipop, and back down the stick). The trail was well-marked until about halfway through, when the blazes suddenly disappeared. Then I hit an intersection that was unmarked as well. After trying to figure it out on my own with no success, I backtracked. Weird.

There was lots of bug clouds today – ick. You kind of hold your breath walking through them so you don’t swallow thousands of tiny insects. For those who know birds, what kind of bird is it that sounds like a monkey? I’ve heard these before a few weeks ago, and today there were lots of them on the trails. I never see the birds, but their sound makes me feel like I’m in the jungle.

Another stray thought: what’s up with squirrels? Why are they everywhere in cities, but nowhere in the forests? I don’t think I’ve seen one squirrel yet. Every once in a while there’s a segment where I’ll see/hear lots of chipmunks, but never squirrels. Interesting.

Oh, I’ve been meaning to say that I’ve been trying a new product as I run. It’s called Oral I.V. and is a hydration aid – basically electrolytes in purified water. The product comes in little vials and has no taste. It was first used by the U.S. military (like the SEALS) and law enforcement before being made available to the public, which seemed like a pretty good endorsement to me.

Anyway, on these really hot and humid days, I’ve been taking a vial or two during the day along with my regular water and energy foods. While I can’t say definitively that taking the Oral I.V. has prevented me from getting dehydrated, I can say that I haven’t had any issues with dehydration – and I’m a person who dehydrates easily when exercising. I’m definitely going to try it again in the future (when I’m off the IAT). And if you’re prone to dehydrating, you might want to give it a try.

Last night I stayed at the posh Inn at Wawanissee Point, right near Devil’s Lake. If you want to reward yourself after a long day of hiking, this is definitely the spot. The inn is newer and gorgeous, and has phenomenal panoramic views of the countryside out back. Rooms come with loads of amenities, and there’s a nice happy hour spread, not to mention a delicious breakfast.