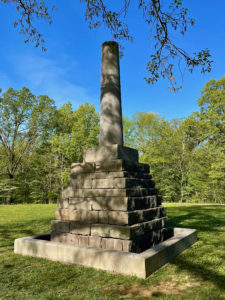 Today’s goal was a section of the Old Trace 14.6 miles (23.5 km) north. As I said yesterday, we’re punting with our schedule, trying to get the miles in without inflaming our tendinitis. First, a quick note on thru-hiking rules and what’s being honest. Many National Scenic Trails define thru-hiking as completing a long-distance trail within one year. Beyond that, there isn’t always more guidance. On the Ice Age Trail, which isn’t completed yet, you’re allowed to hike any way you want along the connecting roads to get to the next trail segment, although the Ice Age Trail Alliance does have a map with suggested connecting routes.

I’ve heard that on the Pacific Crest Trail, the guiding theory is that you hike from one end to the other however you’d like. So if you’d rather not contend with, say, snow on the mountains, you can move off the trail and onto the roads in that area. One hiker said he’d completed the Potomac Heritage Trail, although he’d only hiked the main stem of this unusual, branched-out path, eliminating half of its mileage.

Everyone has to decide what they feel is legitimate to mark a path as completed. For me, as you know if you’ve been reading my trail journals, I believe that if you can’t find a shuttle/taxi on a road route, it’s legitimate to do out-and-back hikes, so long as you hike the same total mileage. So since Amy and I were still worried about our legs, and Meriwether Lewis has several miles of the Old Trace within it, we decided to hike out-and-back on the Old Trace within the park. This way we could eliminate that same number of miles on the hard, cambered parkway. So that’s how we started our day. 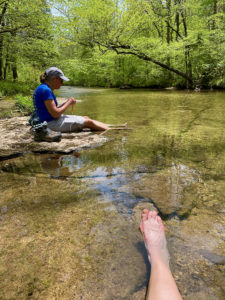 Before starting our trek, we visited Meriwether Lewis’ grave, which is near the old foundations of the inn he stayed at the night before he died. There is also a recreated building from that era nearby. Then we were off.

We hadn’t gone too many miles before we reached Little Swan Creek, with its knee-deep waters. Clearly, we hadn’t done our due-diligence, as we didn’t realize there was a stream crossing. We didn’t have our water shoes along with us, or a towel. So we hiked back out, moved our cars up to the Phosphate Mine pullout and hiked to the spot where the Old Trace left Meriwether Lewis Park and met the parkway. The plan now was to do another out-and-back on the other half of the Old Trace. But that’s not what happened.

While the section of Old Trace from Meriwether Lewis’ grave to the creek was well-marked and traveled, the half from the creek to the parkway was just the opposite. The blazes were hard to find and there were downed trees everywhere, plus incredible amounts of brushy undergrowth. Clearly, no one had hiked here in a long time. By the time we made it to the creek, we had no desire to turn around and re-hike that. So we ate lunch creekside, soaking our sore legs in the cool water. Ah! Then we crossed it and hiked back into Meriwether Lewis Park. 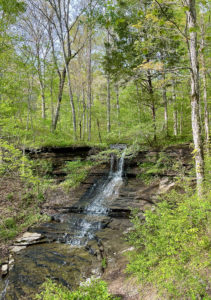 From there, we hiked out of the park and to our cars at Phosphate Mine. Because we’d logged so many miles in Meriwether Lewis, we were able to do an out-and-back from Fall Hollow to Swan View Overlook to complete the day. Actually, only I did that. Amy went ahead to set up her tent at the Fall Hollow campground, which sat just off the Trace on a highway. The Fall Hollow pullout, by the way, features a pretty waterfall. The Swan View Overlook was a bust, as there were so many trees you couldn’t really see into the distance.

I really love my Vivobarefoot water shoes. Get yours here!