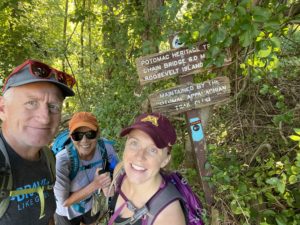 Today’s goal was to finish the PHT along the Potomac in Virginia, plus pick off the last few miles/kilometers of the Circle Forts tour. So yesterday, we finished in Scott’s Run on a PHT detour in the park, due to flooding. Maura wouldn’t let us hike the connecting road route – the dangerous Georgetown Pike from Scott’s Run to Turkey Run – and planned to drive us to Turkey Run to start the day. But I saw some new intel that indicated there was trail east of Scott’s Run that ran into Turkey Run, so we headed to this access point to see if it was true.

It seemed a little sketchy, in that the info said the trail started in a ritzy cul-de-sac and featured a path across the adjacent interstate highway. I couldn’t verify this on Google maps. Anyway, we went there and sure enough, there was a trailhead! The trail went downhill and under the interstate, and Maura hiked the first few miles with us.

Heading Out from Scott’s Run

The first few miles/kilometers with Maura featured some rocky sections and a few streams we had to hop across. Nothing too extreme. But as the day progressed, the trail got rougher and rougher. There were lots of rock 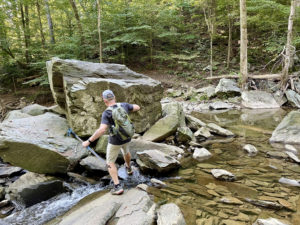 scrambles, including one area where we had to scramble across huge boulders – with the help of several iron railings secured to the rocks – to get down to the river.

There were also a lot of downed trees. And not the kind you can easily hop over or walk around. Our pace slowed dramatically, to less than 2 miles per hour (3.2 kph) in some places. There was also a weird spot where we had to hike under a highway while workers were repairing the highway from underneath. We then had to figure out how to get across a huge, boulder-filled ravine. But we did it!

When we finally hit D.C., we were so happy. These last 8 miles (12.9 km) would be a walk in the park. Not! First, we had trouble finding the exact 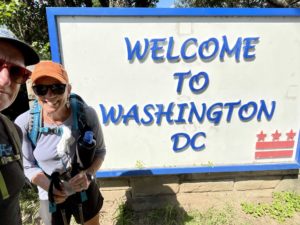 path, as it’s unmarked here and there are many parallel recreational paths. Then many were under construction and featured detours. Suffice it to say this section took us way longer than it should have.

Still, no regrets. I’ve walked through so much of D.C. to date that I have a decent sense of what the city is like now. And a great appreciation for it. And tomorrow I start the C&O Canal Towpath, which I’m sure will bring adventures galore.