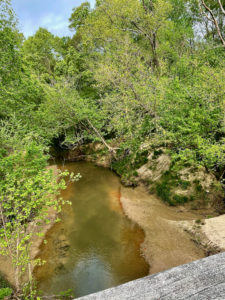 Today’s itinerary called for hiking nearly 20 miles (32.2 km) to the Port Gibson area. Last night, camping at Coles Creek, was OK. It was warm and stuffy in the tent until the middle of the night, when it got cooler. We heard a lot of owls hooting, and some local dogs barking on and off. Every once in a while a vehicle rumbled past.

During breakfast, our weather app showed thunderstorms coming tonight, lasting from about 7 p.m. to 4 a.m. We didn’t fancy setting up camp, and camping, in potential thunderstorms. So I booked a stay in a beautiful, historic B&B in Port Gibson: Collina Plantation Inn. 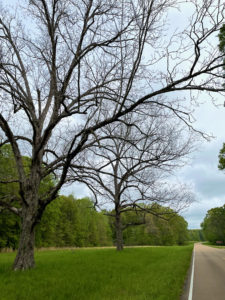 After breaking camp, we dropped cars. Ed went ahead on the parkway, while I dropped my car at the north end of Potkopinu and got ready to begin. The Potkopinu section runs through private land, and the landowner drove out right as I was heading out. We stopped to chat.

He had trapped a raccoon the day before (maybe the one we saw?!), he said, because it was taunting his dogs. He had it in a cage in the bed of his truck, and said he was going to release it near the creek. The man said feral pigs are a HUGE problem here. They’re everywhere. But he said they taste really good. Hmm.

Overall, today’s hike was uneventful. The entire day was along the parkway, with no interpretive pullouts to break up the hike. The weather was warm and stuffy, but mostly cloudy, which helped make it bearable. There was also an occasional breeze. 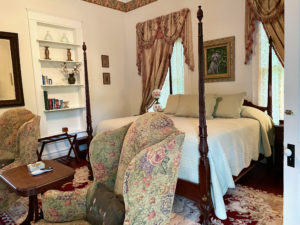 Tucking in for the Night

We had toyed with the idea of hiking a few extra miles at the end of the day. But I was feeling creaky, and it appeared like it was going to storm earlier than planned, so we bagged that and checked in at Collina Plantation Inn. The owners actually washed our stinky duds for us because they said the local laundromat isn’t the greatest. Wow!

So far (8 p.m.), it’s only been sprinkling. It had better storm! Although I don’t regret being in this beautiful, historic place, I’ll feel duped if it stays dry.