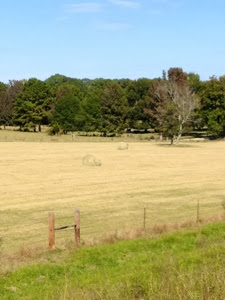 Today we were leaving Port Gibson and heading for Clinton. Luckily, it was another sunny, beautiful day on the Natchez Trace Parkway. The first few hours were pretty cold, though. When we first started, it was 40 degrees out. The Trace was also very shady in this section, which didn’t help. But we warmed up quickly.

Almost immediately after departing Port Gibson, we came upon a famous part of the route: the Sunken Trace. While much of the old Natchez Trace trail has disappeared due to time and development, a few parts remain which you can walk along for a short bit. The Sunken Trace is famed because it’s 30 feet (9 m) deep in places. The old “highway” was worn down by so much traffic, and I suppose erosion and other natural factors. It was impressive to see.

Later we came upon Rocky Arbor. This is the site of a former thriving town that dwindled to nothing due to a number of reasons. There was a one-mile (1.6 km) section of the Trace you could walk here (we did), plus some city ruins to see.

We met and saw a number of interesting people today. At the Sunken Trace, we came across a group of about five septuagenarian couples, all driving Corvettes. They were friends, and one wanted to drive along the Trace. We were leaving when they were arriving, but they quickly zipped past us. With their gray hair and tiny cars, it reminded me of the Zor Shriners in a parade.

Tonight we’re staying in Clinton, a charming city on the edge of the capital city of Jackson. It appears just as lovely as Port Gibson, although we didn’t get to see too much of the latter since we ate at the inn last night. Our lodging is the Hampton Inn, and it’s lovely.