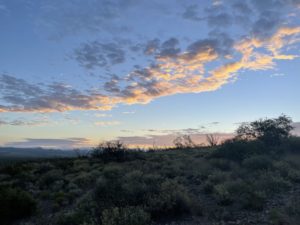 I assumed this portion of the CDT in New Mexico would be very similar to the AZT, in that you start out in desert terrain and end up in more mountainous territory. And that’s accurate. But I also thought the trail blazing would be similar, and it’s not.

Heading Out from Big Hatchet

The first few miles heading out from camp were fine, if memory serves. But at some point early on, the trail essentially involved 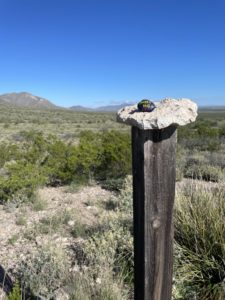 hiking blaze to blaze, with the blazes being wooden posts that didn’t stand out in any way. The trail disappeared. So you had to have your phone app up almost all the time to see where you were going. When a little piece of trail did pop up, it ended quickly, so I kept getting off the path.

In addition, the terrain was rocky with lots of bad, prickly vegetation. You also had to keep going up and down arroyos, which at times was dangerous, as some of the climbs were steep with loose shale.

Because of these issues, my pace was miserably slow – about 1.5 mph (2.4 kph). This also meant I had to be extra careful with my water. The next cache box was =12 miles away (19.3 km), and I only had 2.5 liters of water on me. If I could go my normal pace, I’d make it until the next cache. But since I was going so slowly, I’d have to drink less.

I found patches of shade for my snack and lunch, so that was nice. But it was so hot out that my energy bars were hot and melted, and tasted gross. I could barely choke them down. 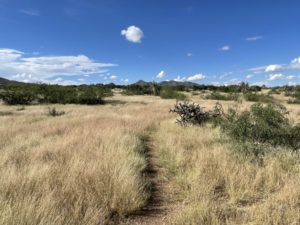 The afternoon started on an easy-to-follow path. That soon ended. Sigh. I won’t keep repeating my struggles. Suffice it to say that the rest of the day featured the same stretches of great trail interspersed with a lot of no-trail and trying to spot markers.

I did make it to the water cache with all empty bottles, per my plan – or so I thought. But I’d miscounted, and actually had a full liter left! Argh! I was so dehydrated, thinking I’d had to ration my water, and here I had a full liter untouched! I gulped down a full liter or more at the water cache, then refilled all four bottles and a little bit more in my Sawyer Squeeze pouch. But I was afraid to carry too much water, as it’s heavy.

I ended the day about 2.3 miles (3.7 km) shy of my goal. I had the energy to have hiked farther, but amidst a ton of rocky terrain I suddenly saw a nice, sandy spot. It looked great for a campsite, plus I wanted to have time to unpack and eat in the light. There’s also been a lot of clouds and thunder. It’s humid – ick.

Dehydration on the Mind

Tomorrow’s water cache box is 15 miles away (24.1 km). I’m so thirsty right now, but trying to conserve. I sent a Garmin message to Jeffery to see if he can drop some water about 5 miles (8 km) into the day at a road crossing that appears to be near Hachita, where he lives. Hoping he can do it!

Two items I’d recommend after two days on this trail: Solomon gaiters, as there is so much dust and grit and prickly stuff out here. And Keen hiking shoes, my new faves. They’re pricy, but if you’re hiking in rocky terrain that eats up the soles of your shoes, these stand up longer than many others.