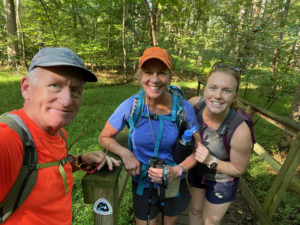 Today’s goal was Scott’s Run. For those of you (like me) who aren’t from this part of the country, a “run” is a small creek. This may not be a totally accurate definition, but I’m not finding one online.

Anyway, Maura drove us to Algonkian Regional Park, where the NPS app indicated we’d have to hike on some trails a little west through the park – to a dead end – then hike back to the parking area and continue east to Scott’s Run. Today is Labor Day, so there were lots of people at the park. The trail was reasonably well marked, but when it ended the blazes just stopped, although the trail continued on. Note to the NPS: Put up a sign saying, “This is the end of the Potomac Heritage Trail.”

Maura had to go back home when we got back to the parking lot, so Ed and I 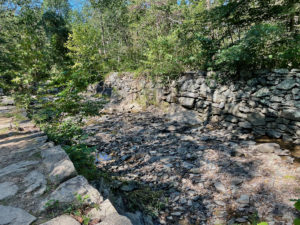 were on our own. The trail heading east started off as a wide gravel path. Eventually, it turned into a narrower path through the woods. We were having a great hike. Then the trail popped us out onto a golf course.

A sign said we had to walk 75 feet (22.9 m) on the fairway before getting back on the trail. I mistakenly through it said 750 feet (228.6 m), and Ed wasn’t really paying attention. So we began trekking along golf cart paths. I said to Ed that this seemed dangerous, but the NPS app showed that we were on the correct path.

After walking maybe a half-mile (1 km) on the golf cart path, a golfer zipped up in his cart and told us we weren’t on the trail. Sure enough, it was off in the woods in the middle of the golf course. Not sure how we missed it, but we did.

Ed and I enjoyed lovely hiking for the afternoon. At one point, we passed some stone walls that George Washington had built in the late 1700s as a 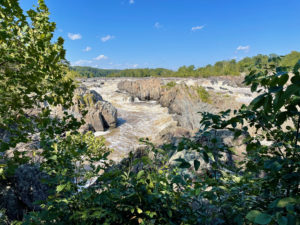 canal/bypass around Seneca Falls in order to make the Potomac River navigable. And then we reached Great Falls Park. Oh my goodness! We had no idea how impressive the waterfalls are here. My photos do not do them justice.

We took loads of photos and continued hiking to the end of the trail, which hits the Georgetown Pike. There were some huge, rocky uphills and downhills, so our progress slowed. But we made it.

Now, I’ve hiked thousands of miles on our National Scenic Trails. And oftentimes you have to hike on busy roads (connecting road routes) to get back to trail. The map here showed us hiking on the Georgetown Pike to nearby Scott’s Run. Maura said NO WAY. There is no shoulder on the Pike, plus only about a foot of grass, and it’s windy and hilly. Lots of people get 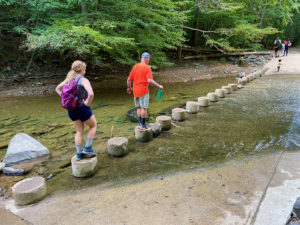 killed here. Ed and I did hike a tiny bit on the Pike until Maura met us, but we agreed – this is WAY too dangerous of a road to walk along. So she shuttled us to Scott’s Run.

Scott’s Run should have been an hour’s hike along a U-shaped trail. But due to lots of rain, the trail was washed out at one point. So the PHT was detoured. Frustratingly, there were a few really good signs about where the PHT was detoured to, but then the signs stopped. We ended up making a circle back to our car in the lot, but I’m not sure that was the correct path. Oh, well. With thru-hiking, you try your best with the info you have. And with the PHT, the information is often contradictory.

Oh! I should have mentioned this earlier. When Maura tried to hike in to meet me two days ago, at the end of the day, she was stymied by a gnarly trail and poison ivy. As she backtracked, she got bitten by a spider. Her ankle got swollen and we all tried to analyze what was going on. Was this poison ivy? A spider bite? Both? Did she need medical care? We ended up thinking it was both, so she is applying hydrocortisone for the itching. But while the swelling has gone done, it’s now a nasty purple …

So my 60th birthday is Wednesday. Maura drove us home today from Scott’s Run and surprised me (along with Ed) with a birthday party! I’ve always wanted a surprise party, but ever expected one in the midst of thru-hiking the PHT. Thanks, Maura and Ed!