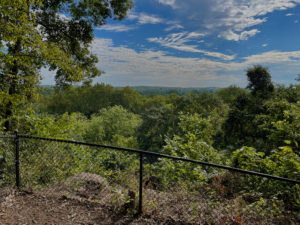 Today starts a new section of the PHT – an angled path along the Potomac (Virginia side) from Ball’s Bluff to D.C. As it’s a Saturday, Maura decided to join us for the day. So we headed out for Ball’s Bluff Regional Park bright and early in the morning.

After well over a week of horribly hot temperatures and soaring humidity, it’s been so wonderful to enjoy moderate temps in the low 80s F (27-28 C), as was the case today.

Anyway, Ball’s Bluff was the site of a Civil War battle that the Union troops lost. According to maps and my research, the PHT was merely a hike up to an overlook here, then a road walk to Keep Loudoun Beautiful Park. Wrong!

Striking Out from Ball’s Bluff

We parked at the park, then headed to the overlook. I passed an intriguing cemetery, assuming I could check it out later. But once at the overlook, blue PHT blazes led us into the woods. Once again, the NPS app conflicted with what we were seeing. Blue blazes led us both along the water and atop the bluff; spur trails to parking areas were marked the same as the regular trail. It was rather confusing. Eventually, we made it through and out of the park. I wish I’d had the chance to check out that cemetery!

Once on the roads, Ed and Maura left to move the car to Keep Loudoun Beautiful 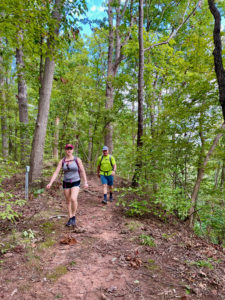 Park while I did a road walk. From a 2D map, it appeared the park was just south of modestly sized Hwy. 7 and west of Goose Creek, so I’d be able to hike through the park, along the highway over the creek, and then over to the next stretch of trail on the north side of the highway and east side of Goose Creek.

When I got there, however, the park was below the highway at the base of a rocky cliff, and Hwy. 7 up above was a major thoroughfare. It would not be safe to hike across the highway/bridge, plus it would take a lot of backtracking to reach it. I have no idea why a road walk led here, as the tiny park is essentially a collection of picnic tables near the creek. There are no trails or even greenery. Just a parking lot and those picnic tables.

Ed drove us across the bridge to ensure my safe passage, and I headed off to the trail. According to the app map, the trail began again just on the other side of the highway and river. Wrong! I accessed the path from an unmarked blacktopped path in a 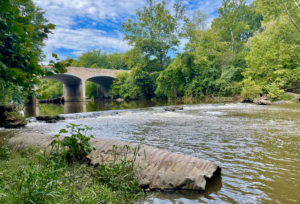 neighborhood (the app was correct about that!). But there was no path southbound to the highway/bridge – only a northbound path. So that’s what I took.

This path was super overgrown and full of spiders. Of course, this was the first day I did not wear my calf compression sleeves, which not only keep your muscles warm, but protect against the scratchy vegetation you encounter when hiking. So my legs got all scratched up. The trail was very hard to discern in places, too. But eventually it became much better as it neared Elizabeth Mills Riverfront Park.

Weird End to the Day

Ed hiked in to meet me, and informed me that the parking area wasn’t near the trail in Elizabeth Mills. So Maura had moved it (and our lunch) to Bles Park. When we finally met Maura, we enjoyed a late lunch.

I headed out solo from Bles Park, intending to meet the other two where the trail ended near Hwy. 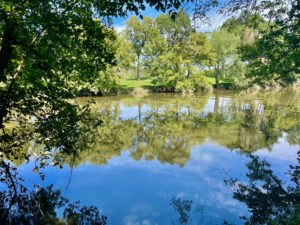 7 and Broad Run. But before reaching the highway, the trail devolved and abruptly ended in the middle of the woods. Maura tried to hike in from the other end – she did find a marked trail and entry point – but it was so overgrown she couldn’t proceed. I had to end up bushwhacking my way up to an apartment complex.

To reach Algonkian Parkway and the next section of trail, I’d once again have to walk along busy Hwy. 7. Since that was unsafe, Ed instead drove me that short bit and I resumed my trek along the parkway, which features a lovely blacktopped path. I ended the day hiking to the entrance to Algonkian Regional Park, where I’ll start again on Monday. I’m taking a zero day tomorrow! That’s a first for me.