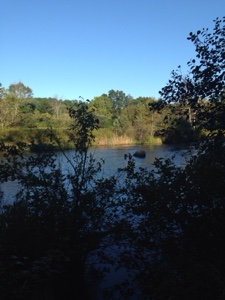 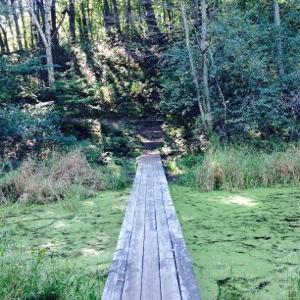 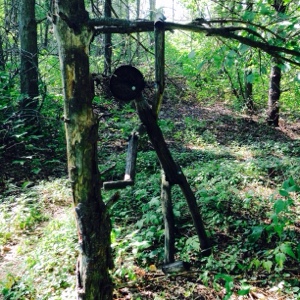 Started the day in the lovely Waupaca River segment. When I passed through in 2013 the cabin was locked. It was open today, so I peeked inside and signed the register.

Skunk and Foster Lakes were quite pretty, although I got stymied at the same spot as in 2013. When you enter the cornfield, there are one or two key blazes/arrows missing. I passed the spot where I should have entered into the woods. When I realized it, it was easier to bushwhack and get onto the trail (thanks to GPS) than backtrack. Plus I’d been looking into the woods at every trail intersection when I’d skirted the cornfield and hadn’t seen any blazes, so they were either covered by vegetation or set back a ways onto the trail.

I mapped out my own connecting route to Iola/New Hope, which took me on some very pretty side roads. It was great because there were few cars and lots of shade, and it was about 80 today.

At Iola, some guy maintaining the ski trails asked why I was hiking the IAT. He said most people he met were recently divorced, had had cancer, were retired, were seeking something, etc., and he wanted to know my reason. I didn’t have anything compelling other than that I wanted to do it. 🙂 He mentioned some rich guy from the Cities landed his private helicopter at the ski hill so he could hike the segment. He was segment-hiking, flying his chopper to all of the legs. Ha!

Ended the day on a connecting route a bit north of Rosholt.