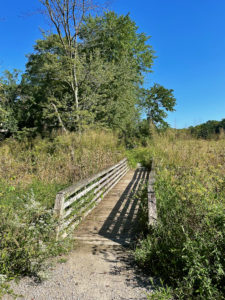 I was stoked today to hike through the Occoquan section of the PHT, since this would mark the end of my exploration in this area of the trail. Before heading there, I first hiked a few miles out of Prince William Forest Park in the opposite direction that I’d taken a few days ago, to officially finish this area. Then Ed shuttled me back to the Neabsco area to head east.

The trail began as a blacktopped path near some water, then wound through an industrial area. The NPS app showed a little spur into the Featherstone National Wildlife Refuge, but when we tried to hike it signs said no humans were allowed. Hmm.

So we continued on through the streets until reaching Occoquan Bay Wildlife Refuge. The trail ran alongside the refuge, so we couldn’t see too much. It appeared you could drive through it, which was interesting. 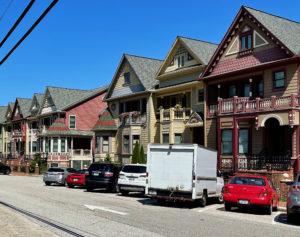 The PHT passed the Potomac here, and some creeks and coves. I can’t keep them all straight! Ed drove ahead to the town of Occoquan, which is a cute, historic spot, then walked back to meet me. I just had a road walk here.

Since it was lunch time, we got a sandwich at a small shop, plus some yummy gelato. Then we arrived at Occoquan Regional Park, which is quite nice. It features a spacious recreation area, bridge and more. Once across the bridge, I was on my final leg of the day.

Finishing Up This Section of the PHT

After leaving the Occoquan area, I had a road walk that took me behind a former prison. It looked somewhat creepy. There were also all of these old palettes in the 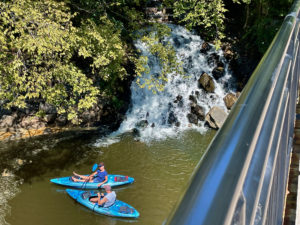 back, which appeared to be formed into structures. Maybe some Halloween haunted activities are held here? Yep, said some girls I ran into later.

From the old prison I had another long stretch of road walking. It wasn’t too bad, though, because the weather wasn’t too hot and there was a nice breeze, although I was out under the open sun.

Once again, the NPS app showed a small piece of trail at the very end of the day, which would lead me from Hwy. 1 to the Meadowood Bike Trail System. But neither Ed nor I could find it, so I finished the day on the roads.