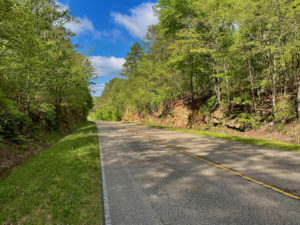 My itinerary called for a longer, 21-mile (33.8-km) day from about mile post 299 to Buzzard Roost Spring. But first, about last night. We were camping at Pharr Mounds, and I chose to pitch my tent under a covered area on a concrete slab. Amy pitched on the grass. It sprinkled a little overnight, so her tent was wet. Mine was dry – not even condensation from the frosty temps (35 F. / 1.7 C.). We both were plenty warm.

Today’s start was going to be unusual. My normal 20 miles (32.2 km) left me around mile post 299 yesterday, where there was no place to pull over and park. So I’d ended the day with an out-and-back. This meant today’s start would be the same.

I thought we might have to drive up many miles and do a long out-and-back, which isn’t desirable. Luckily, we found one of the Trace’s “turnarounds” near 298. These are semicircular pulloffs that appear to be for vehicles that need to turn around and go in the other direction. They’re not marked on the parkway maps, so you don’t known where they’ll appear. But it was great to have one so close to 299, because we could then do a short out-and-back. From there, we could employ our usual leapfrogging technique.

Amy had been having some tendinitis issues on one leg, and shortly after starting today she realized she needed to take a zero day. So she dropped me off and/or picked me up twice today, while resting her leg, icing and checking out other spots.

The biggest highlight today was crossing into Alabama! The vast majority of the Trace (about three-quarters) is in Mississippi. There are just under 33 miles (53.1 km) in Alabama, so we’ll be at the Alabama-Tennessee state line tomorrow already! 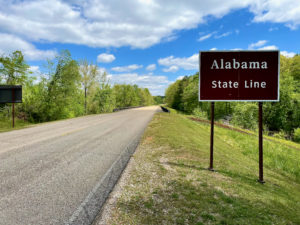 Anyway, it was interesting that as we neared Alabama, the terrain got rocky. As in, there were huge rocks in the ground as well as rocky outcrops lining the parkway. Mississippi’s gently undulating path also became moderately undulating, with steeper and longer uphills and downhills.

We reached Buzzard Roost Spring as planned. But despite its colorful name, it was a nondescript spring. Oh, well!

Forgot to mention the temps. After suffering through the mid-80s F. (29.4 C.) the first week with Ed, we’d enjoyed moderate temperatures once Amy arrived. Last night was cold, and today only got up to about 55 F. (12.8 C.). That’s normally comfy hiking weather, except there was a strong, biting wind. So I was cold most of the day.

But the wildflowers were pretty and I learned a lot about the Trail of Tears, which intersects with the Trace around here. We hiked to the Freedom Hills Overlook, which is the highest point on the Trace in Alabama, at 800 feet (243.8 meters). 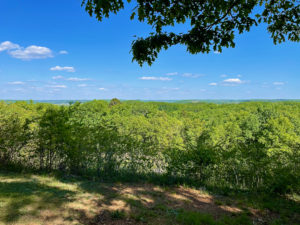 We decided to drive up eight miles (12.9 km) and camp at Colbert Ferry, where there is a biker campground and heated restrooms. Heated restrooms can’t be beat in cold temps! (It’s snowing back home right now.)

Amy arrived a few hours before me and set up camp in a leisurely fashion.  I was hurried and harried. But I got the job done, and we even met a couple from Iowa who is looking for a winter home here.

I was tempted to pitch my tent under another overhang near the restrooms. But Amy had already set up in a nearby patch of grass, so I followed suit.

Tomorrow night we’re supposed to camp here again. We’ll probably leave our tents, but stash our quilts and pads in our cars. I hope no one steals the tents or wrecks them. I’m probably just being paranoid.

I love my Sea-to-Summit ultralight sleeping pad. Get yours here!