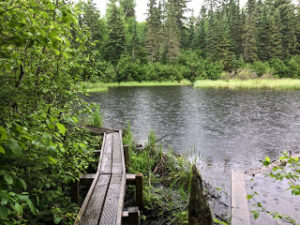 Today’s trek, on my slimmed-down itinerary, is a jaunt from the Cascade River area to Grand Marais. Specifically, the Pincushion trailhead, so named because it sits atop Pincushion Mountain. I felt a little wistful this morning, as today is my mom’s 85th birthday and also Father’s Day. It’s a hard time to be away from home, especially when the cell service is sketchy. But the trail continues to unspool before me.

Harriet didn’t want to shuttle me at 8 a.m., so I pushed back my start time to 9 a.m. By the time I got on the trail is was 9:40. I’d wanted to start earlier to avoid the rain forecast for the afternoon – or at least get in as much hiking in the dry weather as possible. Oh, well. You take what you get.

Striking Out for Grand Marais

The day started off with gray skies overhead and a trail that featured scruffy and overgrown vegetation. There were no scenic views, even though I apparently hit one of the highest points on the trail. After about an hour the sun peeked out and the humidity soared. Ugh.

Things got better as noon neared. The sun went away and things cooled a tad. The trail started to pass through pretty stands of birch and other hardwoods; the overgrown vegetation fell away. There were a few steep climbs and descents, but mostly lovely walking. 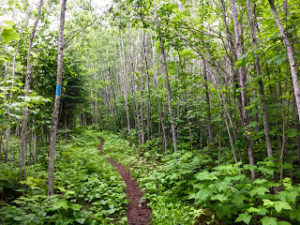 Midway through the day I met a young couple going SOBO. The husband had lost a tooth on the second day eating his wife’s too-hard granola, so she called him Toothless. She didn’t have a trail name yet, but I’m going to text her and suggest it be Granola. They had two dogs with them, Ursula and Cruella. They must be Disney fans!

Well, she said she was singing because a while back she’d glimpsed a large, furry animal in the middle of the trail, likely a bear! It did not race off into the woods as bears normally do because it didn’t see her. Or hear or smell her, apparently. So she began singing.

I was headed the way of the bear. While I’m not normally afraid of them, as they tend to run away from people, this is cub season, and THAT makes me very nervous. So after she left I began singing out loud in the woods. I couldn’t think of that many songs, though, so I began practicing my Thousand-Miler book talk out loud for the next 45 minutes or so.

Eventually, the trail turned onto an ATV path for 2.5 miles (4 km), and things began to get unpleasant re: mosquitoes. I’ve been so lucky this hike, as I haven’t had to break out the full bug suit yet, and have only worn the head net on and off. Well, at one point it was horrendous, and I was longing for the bug suit. Mosquitoes were chomping me everywhere, even if I’d just sprayed DEET on myself! Luckily it began to rain again, and that drove away the pests. The rain kept up until I got off the trail in Grand Marais. Phew!

So today ended up being just an average day on the trail, scenery-wise. Just a lovely walk in the woods. But that’s O.K. Those days are good, too.

My top recommendations for hiking during mosquito season: A bug suit, or at least a bug head net, plus a bug repellent with 20 percent Picaridin.

You can purchase a Coghlan’s bug suit here (it’s the one I use). There are lots of quality head nets to buy, such as this one by  Sea to Summit.

I’m also a big fan of Sawyer’s Picaridin bug spray; you can buy the spray I use here.