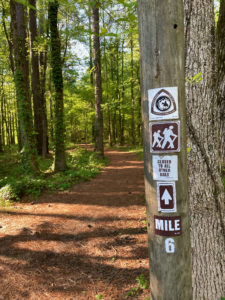 Today was another 20-miler (32.2 km), as the plan was to hike from Blackland Prairie – another trail segment! – to Twentymile Bottom Overlook. The forecast was for a nice, sunny day in the low 70s F. (21 C.). I was excited because I’d stopped at a Walmart in Tupelo and bought some real food for my lunches – items for turkey sandwiches, plus veggies and dip. I like energy bars and Pop Tarts, but after a while, I crave real food!

Striking Out for Twentymile Bottom Overlook

Due to our leapfrogging shuttle strategy, we dropped one car at each end of the segment and began hiking north to south. It was SO wonderful to be on real trail! We hiked past loblolly pine and other tree species whose names I’m forgetting. We crossed bridges and boardwalks. And, of course, we hiked through stretches of prairie, as this section name indicates.

Nearing the End of the Trail Segment

After four miles (6.4 km) of southbound hiking, we reached the Chickasaw Village Site, an interpretive pullout about the Native Americans who once called this land home. Here, the trail got confusing, as it intersected with other paths and the markings disappeared. We ran into a local doing some hill repeats on the trail, but he didn’t know where it went. 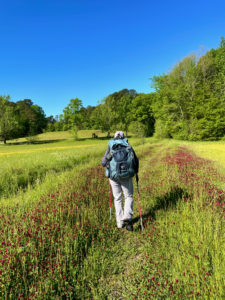 We reached a small creek and the trail disappeared, so we headed back to the parkway through a field of long grass. I was worried about ticks, but there weren’t any. Phew! Shortly after we got on the parkway, we spotted the trail and plunged back on. From there, it was a pleasant stroll back to the southern end. There was one bridge out, which is why the trail is marked as closed. But you can easily walk across the water on sturdy pieces of the cement bridgework still in place.

After those lovely trail miles, the rest of the day was on the Trace. One highlight was a visitor center. Or so we thought. It was open, although that meant that you could walk to the front door and face a plexiglass shield, behind which volunteers stood. All they could do was pass parkway brochures through a slot. Oh, well.

Amy and I enjoyed checking out some old graves along the Trace, plus the Twentymile Bottom Overlook at the end. All of this walking on blacktop is hard on our feet. Thank God the traffic was much less horrendous than yesterday. There were also many pretty vistas. 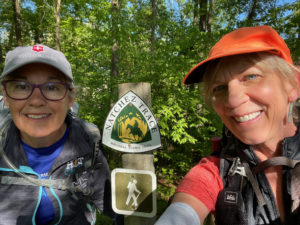 We’d planned to be camping tonight, but decided to spend another night in town. Good thing, because Amy left her trekking poles at one interpretive pullout, where we were switching cars. When we went back at the end of the day, she found just one broken pole there. It looked like the area had been mowed, so we’re thinking the mowers hit one pole, broke it, saw the second and tossed it out. So she went to Walmart and bought a new set.

Book your stay at the Holiday Inn & Suites in Tupelo here!