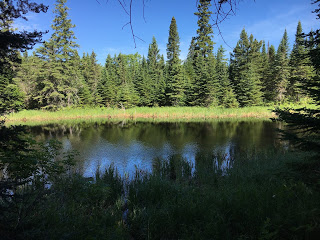 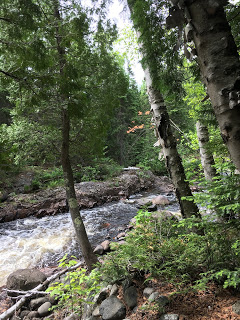 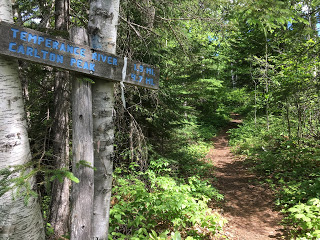 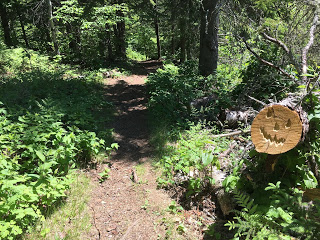 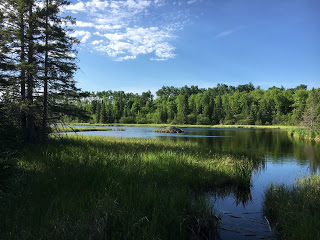 I thought last night would be a warm one in my hammock. When I first tucked in around 8 p.m., it was stuffy. But after a few hours it cooled down, then got cold. I put on my puffy coat and slid on my rain pants over my long underwear. I had my rain poncho as a blanket, but it didn’t cover my entire body. My legs got so cold I couldn’t sleep. I finally realized the plastic sheet I used to set my belongings on was actually a large trash bag; I fished it out from underneath my backpack and other belongings, then slid into it. This was kind of gross, as it was pretty dirty, being a ground cloth and all. But I was cold! And it did the trick. It warmed me so that I could fall asleep.

Despite all of the above, it was nice falling asleep in camp. I could hear various animals coming to the creek to drink. By the loudness of their splashing, I could imagine whether it was a deer, fox, raccoon, etc.

The morning was lovely. I had my coffee and breakfast, then broke camp and hiked out. The trail was very scenic along the Temperance River. As is common along this trail, there were plenty of killer waterfalls to observe.

Because the Temperance River area is a state park, the trails were pretty well groomed, which was great. I dropped a lot of my heavy camping gear with Brian when I saw him in the park.

And then, the groundhog. Sigh. I was hiking up the other side of the river, making great time, when I spotted a groundhog in the middle of the trail. At first I was excited; I was able to photograph it before it fled.

But then the problem: it DIDN’T flee. Most wild animals will. This guy kept clicking its long front teeth at me. I wasn’t sure if it was a mama protecting babies or a rabid animal. I assumed the former initially, but the animal would not move whether I yelled at it, jabbed my trekking poles toward it, backed off for a while, threw sticks at it, etc. When I tried to detour around it in the scrub, it really started clicking its teeth in earnest, and puffed out its fur.

Finally, I had no choice. I pulled out this little vial of mace Ed had given me three years ago and pushed the button. It was old and wet from many soakings through my backpack, but it worked. As soon as the red liquid hit the groundhog, it ran away. I then sprinted down the path for about 100 yards.

Unfortunately, that wrecked my day. It was warm anyway, and from the groundhog it was a hard slog up to Carlton Peak. The signage was poor, and by the time I reached the peak I was irritable and didn’t care about the view.

I headed down the peak, knowing I had another trail segment of nearly six miles ahead of me. Luckily those miles were easy, and I made good time back to my car at the Oberg Mountain trailhead.

But I learned an important lesson. I can’t keep hiking at this pace. Physically, I can. But mentally, I can’t. I don’t like rolling into camp (or my motel) at 7 or 8 p.m. It doesn’t leave enough time to do anything other than wash up, eat quickly and go to bed. It makes me feel negatively toward the trail, and that’s not fair.

So tonight I made a decision. I’m slowing down my hike, even though I’m almost finished. I will end on a positive note, not a sour one.