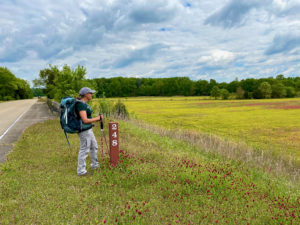 My itinerary called for another 20-mile (32.2-km) hike to Blackland Prairie, the fourth of the five trail segments along the Natchez Trace. Amy and I woke up to cool temps and wet tents. That’s never fun. Oh, well!

On the plus side, last night we’d looked at our itinerary and saw that tonight we’d be staying at the Holiday Inn & Suites in Tupelo for one night. We thought we’d prefer two nights, so I added a second night for us both. So we’ve got two nights to luxuriate in real beds, and two nights of hot showers. Ahh!

After breaking camp, we headed out. The morning was cool (about 55 F. / 12.8 C.) and pleasant, with several interpretive pullouts to break up the miles. And then came the afternoon. UGH.

After enjoying a tasty lunch, we shuttled one car about eight or nine miles (13-14 km) north, then began hiking back to the other one. We knew we’d have some traffic, as we were nearing Tupelo, which has a population of about 40,000. Still, that’s not a big city by any means. So we were unprepared for the crazy amount of Sunday afternoon traffic. 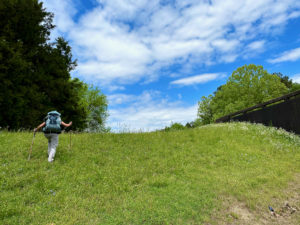 The next several hours, back to our car at Black Belt Overlook, were miserable. The traffic on the parkway was heavy, and it appeared that 99 percent of it was locals speeding along the parkway, not tourists enjoying the scenery.

Many drivers were kind, slowing down or stopping when there was oncoming traffic, since we were hiking on the very edge of the parkway. (There are no shoulders here, and the wildflowers are often knee-high.) But many people were obnoxious, revving their engines as they blew past us at well over the 50 mph (80.5 kph) speed limit. Some appeared to intentionally veer toward us, even if there were no other cars in sight and they could have gone into the left lane. 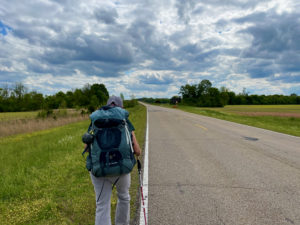 Our ending point for the day was Blackland Prairie. Its southern terminus, that is. It’s actually off of the parkway, and you have to drive a mile or so in a circle through the outskirts of town to access it. But we’re excited to be hiking on TRAIL tomorrow!

I’m excited that the Holiday Inn is one of the nicest Holiday Inns that I’ve stayed at in a while. There’s no free breakfast, but there is free laundry (plus free laundry soap) and a bar and restaurant. So glad we’re here for two nights!

Book your stay at the Holiday Inn & Suites in Tupelo here!