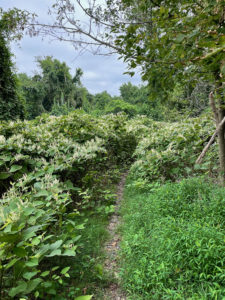 Today’s goal was Fort Bunker Hill, part of D.C.’s Circle Forts. I was excited because John was coming with. He’s Andy’s dad, and Andy is our daughter Maura’s boyfriend. Maura dropped us off at Oxon Hill Manor, where I’d ended yesterday. And then John and I were off.

The first few hours flew by. I was ecstatic because the day was cloudy and cooler, so no suffocating heat and humidity. Early in the hike, we ran into a biker who is into the Camino de Santiago. He’s a local who is also into hiking, and is excited to have me speak about the PHT in the D.C. area in the future. Another guy we saw asked me where I was skiing, mistaking my trekking poles for ski poles!

After a pleasant trek through Oxon Hill Farm and Oxon Cove Park, we had a longer hike on D.C. roads. We passed some of the Circle Forts, such as Fort Ricketts, Fort Davis and Fort DuPont, but they weren’t that impressive. Not to knock them. There were nearly 70 forts during the Civil War era, and less than two dozen remain today – all in varying states. Some are mere earthworks. It’s still cool to see them. 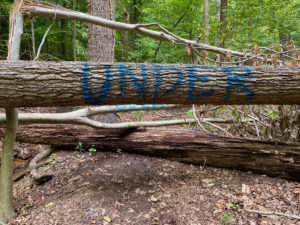 The biggest surprise for me was starting on the hiking/biking trails through the Circle Forts. I assumed these would be paved trails, but they are actually singletrack, and very much like “real” hiking. Although it was Sunday, a weekend, we only saw one biker and two other hikers.

At one point, where there were many downed trees, the trees were spray-painted with instructions as to whether hikers should go “over” or “under” the trees. Ha! I’ve never seen that before.

Maura and Andy met us around Fort Mahan and hiked with us a while. Then Andy and John left, and Maura and I soldiered on. This was mostly road-walking. Maura left me near the National Arboretum, and I finished the day on my own.

Once Maura left me, a driver called out to me as I was crossing a road, asking me how far I was hiking. I told him 750 miles (1,207 km), and tried to explain the PHT in 30 seconds. He was surprised. Shortly after that, I passed a man with some cognitive issues who looked me up and down, taking in my backpack and trekking poles, and said, “That’s different. You are different.” I said, “Yep! I definitely am.”

Today I changed clothes twice, but would have done it three times if I’d had the privacy. Although the weather was much better, it’s still awfully humid. Hurricane Ida just touched down in New Orleans. Those poor people! We are supposed to get some remnants here on Wednesday.