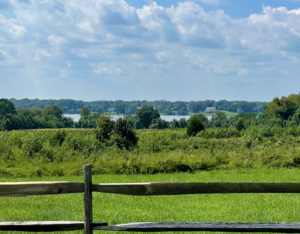 Today’s goal was Oxon Hill Manor. We’re still battling horribly hot temps, so that was a bummer. But I’m trying to think of it as another day down.

Maura shuttled me to my start at Lantana Drive. I got going at 8:11 a.m. But while the morning was great, in that the humidity was lower and there was a nice breeze, I had an almost-immediate snafu.

Without going into too much detail, I’d planned this hike based on directions posted on the NPS website. In mid-April, the NPS launched a new app with info on all of its parks. I saw that in this area of the PHT, there were some different routes. Mostly, it seemed that they were trying to move you off of busier roads.

I decided to stick with my original plan, as switching at the last minute would mean reconfiguring my entire itinerary, switching campground reservations, etc. Well, in this particular spot, the original route couldn’t be hiked, as it is now private property in one spot near National Colonial Farm. So I lost an hour to backtracking. Not fun ever, but especially not during such hot weather.

Heading Out for Oxon Hill Manor

I got back on track and soldiered on. My spirits brightened, since the weather was better and my clothes weren’t getting soaked so early. The route was a mix of narrow roads with no shoulders and busy thoroughfares. At one point, I was hiking on the shoulder of a highway. 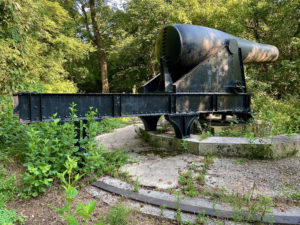 encountered. The Circle Forts are a series of forts constructed during the Civil War era to protect the Capitol from insurrectionists. There are about two dozen, in various states of existence today. That was a disappointment. But it did directly pass Fort Foote.

Winding Down the Day

While the morning weather was pleasant, it got super hot and more humid in the afternoon. I ended up changing clothes three times. Maura met me at Oxon Hill Manor. We drove back to Fort Foote to check it out, where was saw some earthworks and areas where cannons had been placed. All in all, not a bad day.