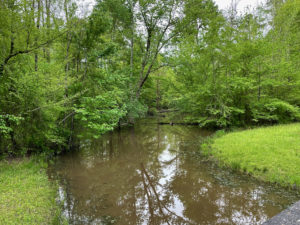 Twenty miles (32.2 km) up the road today was a section of the Old Trace. Amy and I started the same leapfrogging shuttle system Ed and I employed, where we drove one car up to the next pullout, then hiked south to the other car. After that, we leapfrogged the car at the first pullout to the next pullout past the second car, then hiked south to the first.

We ran into the Grand Marais biking ladies, and they explained that they had this moveable tarp system whereby they could string up a tarp overhead so that two people could set up their tents and stay dry. After that, they moved the tarp so the next two women could set up camp, and so on. They also used these for eating. They said we could stay with them and use their tarps. How nice!

Heading Toward the Old Trace

Amy and I continued our leapfrogging. Traffic was heavy at times, unfortunately, probably because we are nearing Tupelo and it’s the start of the weekend. We did enjoy seeing the wildflowers, like red rabbit’s foot clover, bluebells/harebells, irises and more.

Our map indicated a National Park Service district office near Dancy,  just off the Trace, so we drove there and checked it out as a possible camping site out of the rain. Score! It’s a series of buildings, the main one which is not fenced off, and which features a long, narrow covered area. We decided we’d camp here tonight, setting up our tents under the building’s overhang.

Not surprisingly, the weather forecast kept changing throughout the day. At one point, it said a 60 percent chance of rain at 6 p.m. Amy and I finished our hiking and shuttling and reached the Dancy buildings shortly before 6 p.m. We were able to set up our tents, wash up and eat dinner before it started sprinkling. 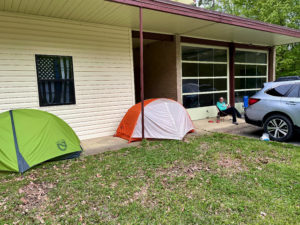 got our tents ready and will hopefully be able to break camp in the morning without too much sogginess.

The one interesting thing: There are outdoor lights on timers here (doesn’t appear to be motion sensors), but they keep going on and off. It will be interesting to see how that affects our sleep! But I’m not complaining.