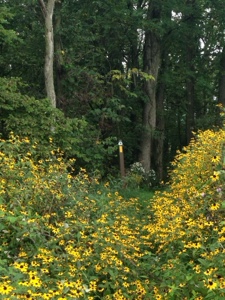 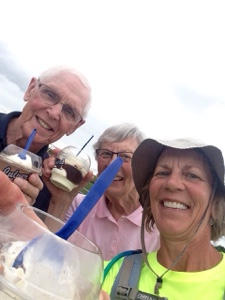 Happy Birthday to me! I’m celebrating my second b-day on the IAT. Who would’ve thought?!

In 2013, I started my b-day hiking the Mondeaux Esker. Today Ed dropped me off near the end of the Albany section on a rail-trail, then left for work. My parents were going to crew me the rest of the day. The first two hours were fine, and then it poured for about 20 minutes. Not too bad.
During those first two hours — even though I was trying to keep an eye on the rail-trail signage — I got off on the wrong trail. Meaning I stayed on the same one, and didn’t switch over. I did not notice any markings, although I suppose there was one. This happened to me in 2013 as well. Maybe a big blaze at that spot would help.
So I ended up in New Glarus, which is where my parents were (they thought the trail went there). They helped me get back on track, and I was off again.
The weather was pretty nice, although humid and buggy at times. Most of the Brooklyn Wildlife and Montrose segments were gorgeous, although two walks through cornfields in the latter were pretty bad — the vegetation was waist- and shoulder-high and quite thick in places so that it was difficult to walk. And because it had rained earlier in the day, I emerged soaking wet and filthy. Oh well!
To keep the ice cream theme going, I had my parents pick up some turtle ice cream at the Culver’s in Verona. Yum!
Because Madison is my home area, I got to see one of my kids tonight, plus my puppy and some friends. Also, my ace massage therapist, Tom Harding, worked out some of the kinks in my now-older body. Time to rest up for tomorrow.