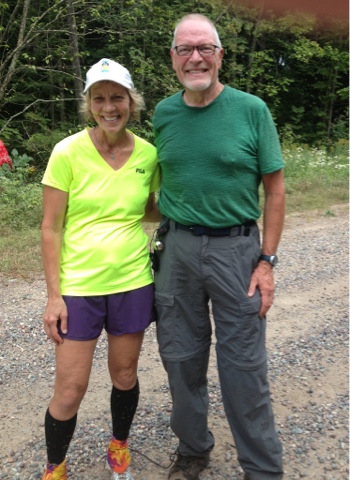 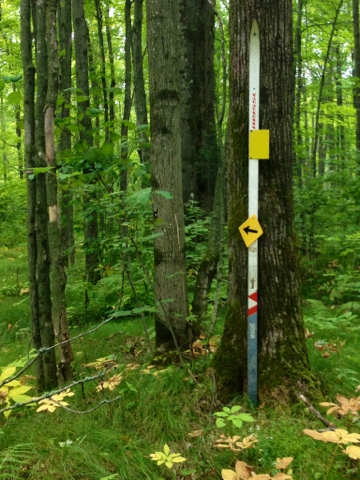 Today, heading to the Newwood segment, was a bittersweet day. Ed, my hubby and star crewer, had to go back home. He’s been invaluable in helping me figure out the daily routine that works best for me, driving me around, lifting all the heavy suitcases, etc. But he was replaced by our younger daughter, Maura, so that was exciting.

Maura’s had a busy year, first studying abroad in Paris from January to May, then interning at the U.S. Mission to the U.N. in New York from June-August. This weekend she’ll return to the U.N. to take an official, temporary job until December 20, so it’s wonderful to spend three days with her before she leaves and we don’t see her until Christmas.

But on to the day’s trek. Wood Lake, materials say, has seen bear activity. It’s also billed as remote and a bunch of other mildly scary things. I found the trail mostly pleasant. Some parts were awesome, and I was able to run a fair amount. I’ve now seen bear poop – I believe it’s officially called bear skat – about a half-dozen times now. How do I know?

Well, it’s poop made by a large animal, it’s a kind of poop I haven’t seen before and it’s poop filled with berry seeds. Put it all together, and I’m sure it’s bear skat. When I see it, I try not to look into the woods as I motor along. But inevitably I glance sideways, and think every downed log is a bear.

Timberland Wilderness was a bit rough. Lots of sticks, logs, some brambly patches. Camp 27 and Newwood run into each other; they were partially nice trail, partially tough trail. At the start of Camp 27, I had to cross a huge beaver dam lined with wildflowers. The wildflowers were filled with bees. Hundreds. Thousands. Millions. All I could hear was a heavy drone as I made my way across, trying not to pay attention.

Saw my first fellow hiker today – Pat Enright. Last spring, Pat walked from the middle of the state to the IAT’s eastern terminus in Sturgeon Bay. Now he’s going in the other direction. Pat had a bear bell around his waist. Bear bells warn bears you’re coming, so they can get out of the way. Why don’t I have one?

Yes, that’s the kind of thoughts I think when I’m on the trail for hours alone, day after day!

Still staying in Merrill with our acquaintance.