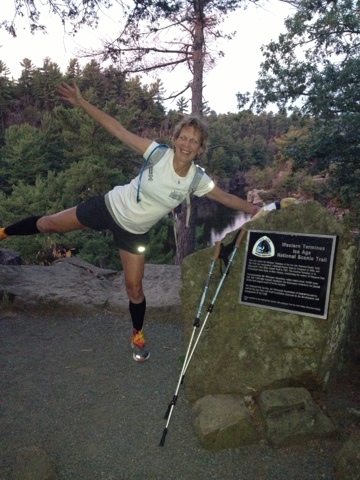 Day 1 starting from St. Croix Falls was hot, with temps reaching the 90s. It was also super humid. I set out at 6:19 a.m. to beat the heat, or at least try to. As I was trotting off from the western terminus marker, which is a plaque affixed to a boulder, I passed three men in running attire heading toward the start. Oh no, were they trying to start a thru-hike, too?!

So, the segment through St. Croix Falls was pleasant. I saw several deer and enjoyed dipping in and out of the trails that wind through town. Eventually, Ed met me in the car to offer food and water. He’d stopped to chat with the guys, and learned they were also running the trail. At least the first few segments, but not the entire thing. Ed said, “You need to try and stay ahead of them!” He was joking, but he made me feel anxious, like I had to try and go fast. In this heat, that wouldn’t be wise.

I looked at the map, but it had a big ending dot right over the spot where we were, and I couldn’t quite make out the route. For some reason, Ed was positive it was to the left. I thought the right. Why I followed him, when he has a terrible sense of direction, I’ll never know. But we soon realized our error.

That little error cost about 20 minutes or so. By the time we got back to the spot where we’d popped out of the woods, those three guys ran past. It seemed like they were smirking. But by then, it was quite warm and more humid. I thought they were going a little too fast for the heat. On the other hand, they looked to be in their 30s, quite a bit younger than me. We’d see.

Soon I reached the Gandy Dancer segment. Lo and behold, those guys were now walking, exhausting. I glided past and yes, I was smirking (to myself). Things really heated up here, I changed everything I was wearing, including my shoes, at one point.

My sister-in-law, Laurie Weaver, drove over from Minnesota to help crew so Ed could join me on the trail. (THANKS!) She was able to find a bunch of geocaches while waiting for us, which she enjoyed. She also joined us for part of the Straight Lake segment.

A big thanks to the Westigards, Trail Angels who left me a cooler filled with snacks, cold water and one of the best homemade wraps I’ve tasted. Not only did I get to enjoy “trail magic” on my first day, but they’d read this blog and addressed me as Valderi. 🙂

The day ended with an ice cold Gandy Dancer stout in hand and 32 miles in the bank. Ed and I are staying at this great B&B, Canyon Road Inn, in Turtle Lake.