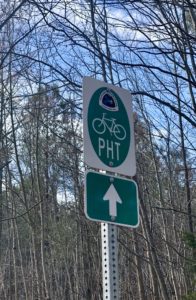 I wasn’t sure I’d make it to Smith Point today, one of the Potomac Heritage Trail’s two southern terminuses. That’s because over the last 24 hours, there has been a huge shift in nationwide concern and action over COVID-19. Suddenly schools are closing, major sports tournaments are off and all sorts of things.

I agonized over whether I should hop on a plane this morning. Would I get stuck out East? What if Ed got sick while I was away? Would he be able to fly out here in two weeks, as planned, to join me or will the airlines all shut down? But my plane left at 6 a.m., and I just didn’t have enough time to ponder everything. So off I went.

My flight from Madison to Chicago was full, but the plane from Chicago to D.C. was nearly empty. All of us were sanitizing our seats, the air vents, etc. The nice thing was that we all had a row of seats to ourselves.

So the Potomac Heritage Trail, or PHT, has two southern terminuses. One is Smith Point in Virginia and the other is Point Lookout in Maryland. Both spots sit where the Potomac River empties into Chesapeake Bay, just on opposite sides of the river. Interestingly – or maybe frustratingly – there are actually two southern terminuses in Virginia, too. There’s Smith Point to the east and Reedville to the west (the terminus is an upside-down T, with Reedville and Smith Point at opposite ends.) If I were to start the trail tomorrow, I’d have to do an out-and-back from one of those points. So I chose to drive down to Smith Point from the airport today, then do an out-and-back hike to the spot where the two sides merge.

Can you believe it? When I drove to park my car at the end of the road leading to Smith Point, that end point split again! So that’s three splits. Sheesh! Luckily this final split was less than a quarter-mile in length, so I didn’t have to backtrack too much. 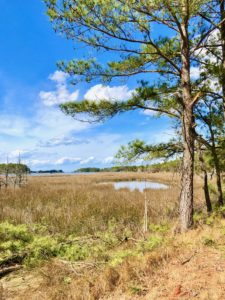 So this portion of the PHT is officially designated as a biking route. But you can walk along the path, too. The route is mainly along quiet country roads. I was hoping Smith Point would afford me prime views of the river and bay, but it’s a private residential development – and so all of the homes are along the water. While I had a few nice glimpses of the river/bay, they were nothing spectacular. But, of course, I’m just getting started.

Let see what tomorrow brings. I know the weather will be kinder. While today was sunny, which was nice, it was 82 (!), which was quite toasty, especially since the route was pretty much all under open skies.

Oh, one more thing. This section of Virginia is called the Northern Neck. Peninsulas are often called necks in Virginia. The moniker also refers to the shape of the peninsula.

One more thing again! Apparently I’m hiking just before the tourism season starts, so many campgrounds aren’t yet open for the season. So tonight and tomorrow I’m staying at the Quality Inn in Warsaw. It’s clean and not expensive – a solid choice. But they said that the breakfast buffet is largely closed down due to the coronavirus.

Book your stay at the Quality Inn in Warsaw here!