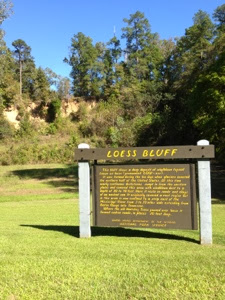 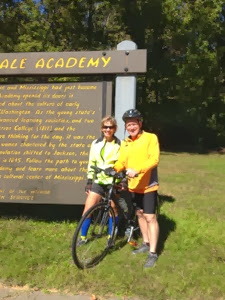 Ed and I drove from my conference in Biloxi to Natchez, Miss., this morning. The trip took about 3.5 hours. Natchez, by the way, is known for its wealth of antebellum homes turned into B&Bs. Kinda wished we’d stayed the night here so I could try one!

Heading North on the Natchez Trace

We unloaded our bikes and were getting ready to start when we saw a couple biking towards us. They were from northern Alabama and had been section-biking the Trace for several years. Because there are no shuttle services on the Trace for bags, they’d drive about 20 miles (32 km) down the Trace, then bike back about 20 miles (32 km), then back to their car again. The next time they came, they’d pick up where they left off. Today, they were finishing the Trace. Because of their system, their finish actually meant they’d biked 888 miles (1,429 km) and simultaneously completed a southern- and northern-bound bike. WOW.

The man was so excited to see us, because we could take their photo. They’d been trying to figure out how to prop up their camera and use the timer to take their own photo. They said the picture we took was so important to them, and would be framed, because this was such a long, Bucket Trip item for them. This encounter made our start all the more special.

Today was a beautiful, sunny day in the low 70s. Ed and I biked from about 1-6 p.m., stopping at the historical markers and seeing some cool stuff. Like Emerald Mound, one of the largest Native American mounds. And Mount Locust, a historic plantation. Traffic on the Trace is limited to 50 mph (80.5 kph). And while there was a reasonably steam stream of cars, it was great biking. I saw more cyclists and motorists stopping to read all of the plaques than I would have expected.

Tonight we’re staying at an awesome B&B in Port Gibson: Isabella B&B. The rooms are spacious and shabby-chic, and they have a restaurant, so we had a fantastic dinner. Several other couples were here tonight, including one from England and another that had been deer-hunting today.