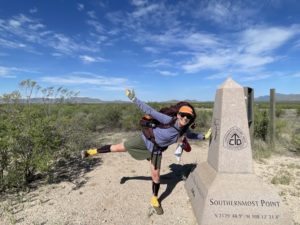 Can’t believe I was standing at Crazy Cook Monument this morning, starting my section-hike of the CDT. I’ve thought about this trail for so long – it seemed so wild and daunting. But one day I realized if I was smart, I’d hike it sooner than later. I’m just getting older every year! So here I am.

My journey began yesterday, when I flew from Madison, Wis., to El Paso, Texas. From there I took a (disgustingly dirty, smelly and fraying) Greyhound bus to Lordsburg, New Mexico. This is where most hikers land.

During the thru-hiking season, which begins in the spring, the 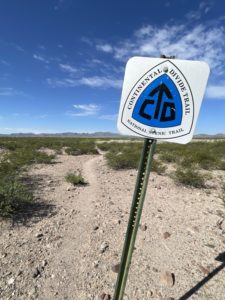 CDT Association runs regular shuttles to Crazy Cook, which is a three-hour drive south and involves a perilous, 10-mile (16.1 km) stretch at the end on really rough roads. There was no shuttle running now, but I found a guy named Jeffrey Sharp in nearby Hachita who helps shuttle hikers and fill water caches.

So after spending the night in the CTD-friendly EconoLodge, Jeffery picked me up around 6:45 a.m. and we were off. He helps mountain bikers doing a neighboring trail and had one at his home, so we stopped there en route. While there, we picked up a friend/helper, Cal Ewing.The three of us traveled the rest of the way.

Cal and Jeffery know every inch of the trail between the southern terminus and Lordsburg, so they pointed out various landmarks and also the locations of the five water caches they help maintain. The caches are on or near the trail and the water is put in metal bear-proof boxes. That’s great, and so necessary, as there is almost no water in this stretch, which is some 83 miles (133.6 km) 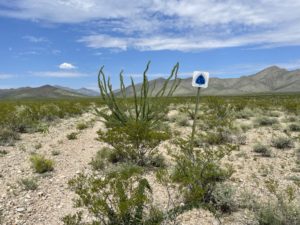 So the quick story about Crazy Cook monument is that it’s not a national monument or anything like that. A long time ago, some camp cook was insulted by a worker (miner?) and took an ax and hit the guy in the head, killing him. Then he left and no one knew what became of him. But some guys in the mid-20th century wanted to mark sites where people were buried along the New Mexico-Mexico border due to various disputes, and they marked the Crazy Cook site (the name coming because the cook clearly was crazy).

When the CDT needed a southern terminus spot, they tried a few other places and ended up near the Crazy Cook site. Today, there’s a really nice marker for the CDT. The guys took my photo, and soon I was off. It was 10:15 a.m. and already quite toasty.

I was carrying more than a gallon of water (+3.8 liters) and I’d downed a liter en route. I had every inch of my body covered to protect against the sun, including a handkerchief under my cap to make sure my neck and ears didn’t burn. I’d been debating about wearing pants versus shorts. I didn’t want to be hot in pants, but I know from doing the AZT that all of the desert vegetation has thorns, prickers, etc. I ended up going with shorts 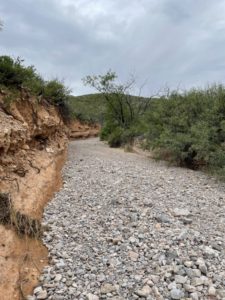 and calf sleeves, leaving only my knees and a little of the bottom thigh exposed. The reason: I had my warm hiking pants with me, since it will be cold when I get farther north. I figured I’d chance it for this first week with shorts.

The first part of the trail is flat. And while the trail often is hard to discern, as it’s hard to make a trail in certain desert terrain, it was easy to see the CDT logo on metal signs in the distance. So with open, flat terrain and sparse vegetation, you could simply hike post to post. That soon changed.

Maybe three miles (5 km) in, the trail became better defined because the vegetation got thicker. But soon the trail started to climb. For the rest of the day it was challenging, because there were long stretches of rocky terrain (walking on rocks the size of golf balls to softballs) and hiking in washes. Washes are similarly rocky, plus have washed out areas that force you to keep veering all over the place.

Once, when I got off-track and tried to do a minor bushwhack (just walking through the knee-high vegetation), I sliced up my exposed legs. Rats. Guess I should have gone with the pants.

I did luck out in that it got cloudy for much of the afternoon, which cooled things off dramatically.

I reached the first water cache (a quarter-mile detour from mile marker 13.8) around 4:45 p.m. I finished my third liter of water and topped off my supplies, plus poured some of the cached water over my head. (There was plenty cached, and the guys said I was probably the only hiker out here, so I figured that was fine). 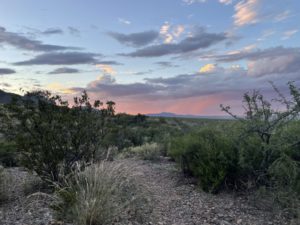 Things got gnarly from here. First, on the way back to pick up the trail, I had a hard time finding where it continued. Turns out you leave the wide wash and turn onto a narrow trail whose sign was blocked by vegetation. Thank goodness for the apps that show you where you are in relation to the trail.

Now the trail began to wind through scruffy, rocky vegetation, and to climb more steeply. But for some reason the trail here was only marked with hard-to-see wooden posts – no blue, metal signs – and the path was hard to discern as well, so I had to keep holding the app open. Eventually, it got easier to see. But then it looked like it might storm.

This is the tail end of New Mexico’s monsoon season, and I’m obviously not familiar with the weather here. I saw what looked like possible rain the distance. I heard some thunder, and it got quite windy. I’d hoped to make it to mile 16.8, where people said there were some good camping spots. But the going was very slow here, so when I found a passable campsite I stopped. It was mile 15.3.

This actually isn’t a great campsite. It’s quite rocky underneath and I had a lot of difficulty setting up my tent in the wind. The wind eventually died down and I was able to eat and get in my tent before the sun set.

I’d had a cortisone shot in my right knee on Friday to help alleviate pain from a torn meniscus and some arthritis. It seemed to be doing great until the very end of the day. I hope it’s OK tomorrow and for the rest of this hike.