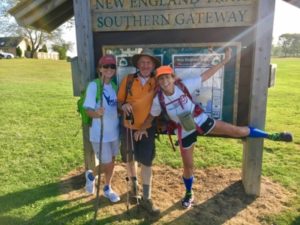 Another thru-hike begins, this time on the NET, or New England Trail!

It was so good to get back out on the trail. Joining me were my husband, Ed, and his older sister, Terry. Ed and I will thru-hike the trail, while Terry was planning to hike with us just this first day.

Yesterday, the remnants of Hurricane Harvey served up strong winds and some rain here in Connecticut. But today was a sunny, beautiful day. Ed and I are hiking northbound, but we’re slackpacking the trail by using two cars. We had planned to rent two for this adventure, but my hiking friend Parks (aka Nick Wagers) happened to plan to hike the NET at the same time as us. He graciously offered us the use of his car as our second vehicle. Luckily this will help him, too, as his car will be waiting for him at the northern terminus when he finishes.

To make our shuttling work, we dropped our rental car 18 miles up the trail at Broomstick Ledges, then hiked southbound to the southern terminus and Parks’ parked car.

News on the NET

I’d heard from my new friend, Nancy Daly, who hiked the NET in July, that this first day wouldn’t be bad at all. Hiking up Broomstick Ledges was a bit strenuous, but once we knocked that section off it was pretty easy going. The terrain here is very rocky; Terry says that is very typical for Connecticut. Other than that, it seemed a lot like Wisconsin and the Ice Age Trail.

We ran into several people on the trail (it’s Labor Day), but a lot of the people we spoke with didn’t necessarily know it was the New England National Scenic Trail. They just called it “the blue-blazed trail.” That is very similar to the Ice Age Trail and Florida Trail. As newer National Scenic Trails, they’re just becoming known.

It was fun to have Terry along, as she is a master gardener and was pointing out various plants to us, such as the mountain laurel, Connecticut’s state tree, plus lots of invasives, like sassafras and Russian olive.

But back to Parks. He had planned to start hiking yesterday, but bagged it due to Hurricane Harvey’s nasty weather. So he began today from the southern terminus. Thus, we were hiking toward each other. We ran into him a little after our lunch break. It was so good to see him again!

We ended our 18-mile inaugural day walking through the streets of Guilford to Chittenden State Park. As we entered town, a man called out to us. We thought he might be a proselytizer, but he was Paul, a trail volunteer. He was thanking us for following the blazes and thrilled that we’d be thru-hiking.

Brian, Terry’s husband, was waiting at the park to pick up Terry, and walked us in the last mile or so.

During our hike, we were telling Terry about the tradition of long-distance hiker trail names. I still wasn’t thrilled with Ed’s choice of Cheese Ed for himself, and when we had run into Parks we mentioned this. Parks sagely said that his favorite trail names were those that others bestowed on hikers based on some hiking incident.

So during our last mile, we discussed names for Terry and Ed. I suggested Tagalong, The Botanist or Sassafras for Terry, since she was tagging along with us for the day, plus had regaled us with plant tales. She loved Sassafras (which is an invasive). For Ed, we decided upon Stubs. During our hike along the North Country Trail in June, he had stubbed his big toe numerous times, and thought at one point it was broken. Today, he complained he kept stubbing his toe again. And there you have it.