Big fat evacuation bummer! So I heard mid-afternoon yesterday about the rain and snow coming. And how everyone was getting off the trail. Except me, 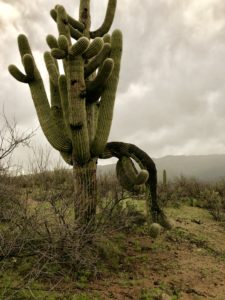 apparently, who didn’t get the memo!

Last night the rain began. I was snug and warm in my tent. But it didn’t stop. At 6 a.m. it was still coming down. Not hard, but steady and drenching. No way was I going to hike 18 miles up and over the mountain, going from 3,500’ to +8,000’ and from rain to more than a foot of snow. I had no rain or snow gear; for once I was trying to pack light like everyone says! And post-holing is no fun. Plus, it’s dangerous, especially solo.

A Conundrum: How to Arrange an Evacuation

Thank goodness my itinerary listed lots of passage stewards and other contacts. I called them all. Dan, from Saguaro National Park, gave me a three-mile route to hike to a non-AZT trailhead, then said a ranger would pick me up and take me to the visitor center. Then he called back and said no, the visitor center doesn’t pick up people anymore, so I’d have to hike 10 miles there in the cold rain. Not the worst thing.

Luckily Ken, a passage steward, called right after I spoke with Dan. He could get me if I backtracked 2.1 miles and forded a creek. That sounded great!

Less than an hour later I was in his Suburban, all warm and cozy and enjoying my evacuation off of Mica Mountain.

Ken brought me to his home so I could figure out what to do. Long story short: I’m back at Sandy’s, where I dried my tent and washed my clothes. Two of my friends arrive tomorrow to hike with me for a week. But where will we hike?

The rangers expect Mt. Mica and Mt. Lemmon to have 18” of snow. Post-holing through that would be awful. I have some appropriate gear, but not enough. Plus, again, it’s dangerous. The winds are supposed to be strong tomorrow.

So far on this hike I’ve been stymied by snow, a prescribed burn and now more snow. Ken said Tucson already had an inch more rain annually than normal, before this last rain – and it’s only March. Plus, Tucson only gets 10” a year normally, and they’ve just had 36 hours of more rain.

I guess I have to decide how much of a purist I want to be. Yes, I want to hike every inch of the trail. But I’m not retired and so don’t have unlimited time. Normally, trails offer detours for Mother Nature events. There was one around Miller Peak when it got socked with snow. But there apparently isn’t any easy detour here, around these two mountains.

Guess I can sleep on it. But the real takeaway from this: there are an awfully lot of nice people in this world!

These mile totals are now going to be all skewed, but life isn’t perfect, is it?