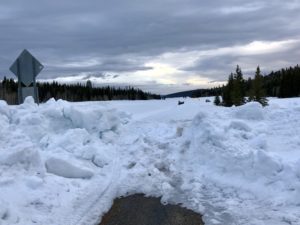 I left my lovely porch by 6:30 a.m. What a great spot! I heard the wind all night, but two sides of the cabin provided shelter, as did a giant wood pile, so I was nice and cozy.

The first mile or so was on the last, unplowed stretch of Hwy. 67. Easy walking; no postholing. Yay! From there on it was blacktop. I easily clicked off more than three miles per hour. I could possibly make it all the way to Jacob Lake (about 33 miles), or camp alongside the road.

After an hour, the wind picked up and the snow began. At first, although it was nearly a whiteout, it wasn’t too bad. The snow was dry and didn’t soak in. The wind was the worst thing.

But as the day wore on, it got worse and worse – it turned into a blizzard! And then the snow changed from dry to wet to nearly rain. And it was cold out.

I’d originally considered camping along the road, but there were no good sites. Initially, all of the landscape was covered in several feet of snow. Then, as the elevation dropped, the snow began to disappear. But the landscape looked like it had been burned and logged. Ugly, bare tree trunks dotted barren fields. Yuck.

Eventually, I knew I had no other choice but to make it to Jacob Lake. I was soaked, chilled and miserable, and my gear was damp/wet. So on I trudged.

I’d tried to make reservations at the one inn in town a few months back, telling the staff I couldn’t give an exact date due to the Grand Canyon permit process. They said not to worry; they were never full this time of year. I did not need reservations.

I stumbled in, dripping water everywhere, around 5 p.m. All rooms were taken, they said. So sorry. I gave them my story, nearly in tears, and 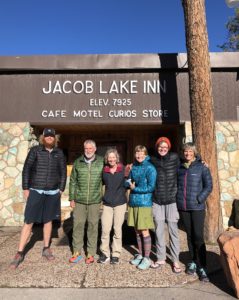 suddenly they “found” a cancellation in their new lodge.

I’m guessing they got slammed with guests due to the crappy weather. I’m also guessing they haven’t formally opened the whole property yet, or have the staff in place, so they were hoping to keep numbers down. Glad they reconsidered!

Had dinner with Cookie, Tic Toc and Cashmere, hikers I’d met back in Patagonia, plus old acquaintance Cake and new friends Nat Geo, Slow Squeeze and Upstream, a young lady from Portland. Everyone said the hike was awful today. The guys even hitched a ride in from 10 miles out, worried about hypothermia. I walked the farthest.

Had some of the place’s famous cookies — yes, they are good! But the shower was better. I’ve got all my stuff drying out now and am looking forward to a long night’s sleep.

They say the weather will be good tomorrow. It had better be!