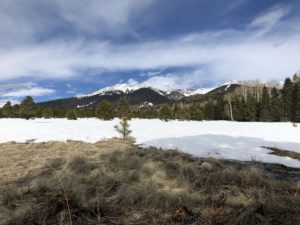 I was nervous today about heading up the mountain. Brian picked me up at 8 a.m. I decided against borrowing his snowshoes based on other hiker reports. He dropped me off of the outskirts of Flagstaff at 8:30, plus offered to drop off four boxes at the post office for me. He even offered to pick me up anywhere if I felt uncomfortable with the conditions. What an incredible trail angel!

As I expected, my pack seemed to weigh 100 pounds. I’d carried merely food and water for several days, so I was used to lighter weight. Plus, today I was toting food for 5.5 days  – and food is really heavy! Luckily, I only had 12 miles to cover, so I hiked slowly and took lots of breaks.

Detour Snafu Heading Up the Mountain

The trail here is another detour due to logging, but it’s unmarked. It’s along popular mountain biking trails, but there are many paths. Almost immediately, I took the wrong path, which I realized when consulting the app.

There were many bikers out, and one young lady told me which paths to take to get back onto the AZT after the detour. Phew!

Once on the AZT again, the path meandered through the area’s famous Ponderosa pines. Can’t recall if I mentioned Flagstaff is on the western edge of the world’s largest Ponderosa pine forest. It was lovely, although warm, as Flagstaff was hitting the 70s today.

Once I crossed Snowbowl Road, I knew the path would climb 1,000 feet over the next five miles. I also knew snow would appear about one or two miles before my camping destination at Alfa Fia Tank. For whatever reason, I assumed it would be patchy snow. I thought my big snow day was tomorrow. Wrong!

The snow was deep and constant the last two miles. Because the last few days were warm, I began to posthole, which is very tiring and 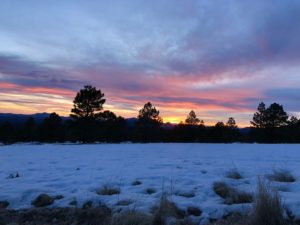 dispiriting. I reminded myself it was better than rocks, but it was mentally tough because I wasn’t expecting this.

Thankfully, Alfa Fia Tank is in an open field  where there were some trees with small patches of dry land surrounding them. I found a spot to camp, and it even had a little stream of snowmelt running next to it. So I could filter water handily and dry out for the night.

The plan is to break camp early tomorrow and get the rest of the way up and over this mountain as quickly as possible, while the overnight-hardened snow might hold me better.

I think I have about six to 10 miles of snow to plow through. Wish me luck. I’m going to need it!