I was nervous today, heading up the Huachuca Mountains. I had arranged for a shuttle from Montezuma Pass and the southern terminus back to my B&B in Patagonia. This would allow me to flip back northbound tomorrow. I said 5 p.m. because I heard the roads to Montezuma Pass aren’t great for driving at night, and most people don’t want to drive them in the dark. 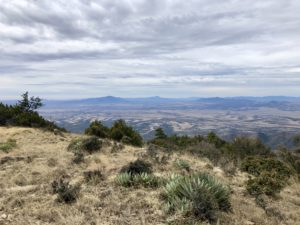 The problem was that my itinerary hadn’t accounted for the fact that the Huachuca Mountains would get a record snowfall shortly before I arrived. A once-in-a-century snowfall. Two or three feet. A lot of it would have melted by the time I reached that section, but the hikers coming northbound told different stories about how bad it was. How bad would it be?

I’d logged longer days the previous two in order to shorten up today’s hike – from a what now seems a crazy 22.5 miles to “just” 17.8 miles. I knew my first eight miles were uphill, and some +3,000 feet in elevation gain to reach Miller Peak, the highest point. That’s a lot! And then there was the snow. I got up extra early and was on the trail by 7:20.

Up, Up, Up the Huachuca Mountains

Those first eight miles were a mixture of gradual uphill and very steep uphills. It wasn’t easy, but I just chugged along. There was plenty of water along the way in a creek that the trail ran near, but I didn’t need water yet. The landscape was forestland, much as what I’d see back home.

Finally the trail evened out and even went downhill a bit. It was interesting, especially for someone coming from a state with no mountains, so to speak. The trail would be on one side, and the wind was fierce and the temps chilly. Then the trail would wind to the other side of the mountain, and there was no wind and you’d get warm. There were small patches of snow on and off, but nothing bad at all. I was ahead of schedule and thought I had it made!

And then, just after passing hiker Rainbow Gap (I think that was her name), I hit the snow. Everyone had been telling me it was all slushy – so slow-going, but nothing bad. Today was a gray, chilly day, and it was icy. To make matters worse, the early hikers had post-holed near the edge of the trail. So you had to step on bushes and watch so your eyes didn’t get poked out by branches. I fell a few times, doing a disservice to my trail name of Snowshoe. It was really difficult. Finally, it was over. Phew!

From there it was mostly a several-mile-long downhill off the Huachuca Mountains. I met a bunch of male hikers, and one couple; they were all dressed in shorts but shivering in the wind. It was mostly windy on this portion. The scenery today was quite beautiful up on top of the mountain – lots of sweeping views. But honestly, I couldn’t appreciate it as much because I had my head down with the wind.

I reached Montezuma Pass around 3 p.m. Things were going great! Now it was just a 1.7-mile out-and-back to the southern terminus, which 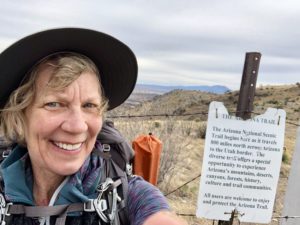 is a plaque stuck to the fence between the U.S. and Mexico. There is also a metal marker noting it’s the boundary between the two countries. Wonder if we have something similar at our Canadian boundary?

Anyway, the path was downhill for much of the way. It didn’t see too bad, but when I headed back up I was just trashed. So exhausted! Too much exertion today. But I reached the parking lot at 4:58 p.m. – yay me! Harry and Doug were my shuttlers. It was 90 minutes back to Patagonia, mostly because you had to go on a circuitous route.

Tonight was a crazy night of washing up (yes!), washing my clothes in the tub because the local laundry was closed, and running out for dinner (and getting ripped off because they “forgot” my call-ahead order, then gave me the wrong thing, less one side). But I’m clean, sleeping in a bed and trying not to think about the next three nights camping, when the temps are supposed to be around 30.