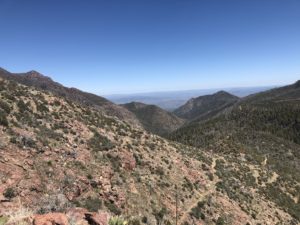 Tim left around 6:30 this morning, before I departed for Pine. It was sad to see him go. We’d had another cold night, but I guess that’s what every night will be.

I headed out by 7:45. After being so awful yesterday, the trail was a dream the first few miles — soft dirt, little swells. Of course, that didn’t last.

The trail got pretty rocky many times. Yuck. But it also switched into pine forest at times, with nice, soft dirt. Some places still had snow, and a few stretches were concerning.

One fun thing: I passed the halfway point today!

Late afternoon I ran into a section-hiker named Mike. He was from Appleton, Wis. (!), but retired here. We hiked and chatted about an hour, which helped pass time.

Unfortunately, Mike said the trail north of Pine is very wet and muddy. Some new trail stewards I met after Mike stopped to set up camp 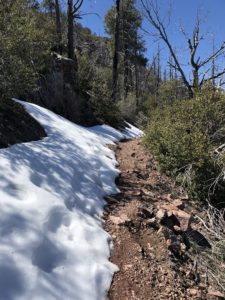 confirmed it was pretty bad.

They also said the Grand Canyon’s North Rim has a LOT of snow. So much that a recent hiker got off the trail and hiked on the road — which doesn’t get plowed/opened until May, so he was still post-holing.

And to think last year was hot and dry! This hike may just do me in.