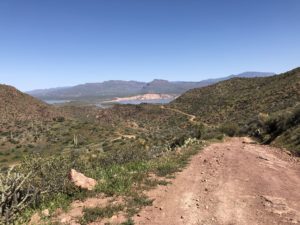 Today’s itinerary called for a quarter-mile detour to Roosevelt Lake somewhere around midday. Actually, the detour was to the Roosevelt Lake Marina, where there is food, drink, bathrooms and WiFi.

This was super exciting because you think about food and drink a lot when you’re hiking long distances. And you look forward to every “event” – anything different than hiking all day and setting up camp at night. So I was stoked for this day.

Well, last night was another cold one, but at least my tent was dry in the morning. I hit the trail around 7:45 a.m. and faced a steep climb for the first hour or so. I knew it was coming, and at least my knee felt OK. It hurts more going downhill.

Once up on the ridge, the trail unspooled a bit before heading downhill many miles to the marina. Here’s where things got a little hairy.

While several miles of this trail were lovely, many were too steeply pitched downhill and/or rocky to be comfortable. One flat section went through a rocky wash (hard to hike), plus along a creek with many downed trees (also hard to hike).

Then, when I thought I had six or seven miles left to the marina, it was actually more like 10. And those last few miles suddenly went uphill, and I missed my final turn for the marina detour and had to backtrack. Of course, I’d just climbed a huge hill.

But I got to Roosevelt Lake Marina! CowStep welcomed me in, as did these three section-hiking men I’d met yesterday. The restaurant doesn’t open until April, but I got a breakfast burrito, ice cream novelty and a Bud Lite Lime in the convenience store part. I had to ask a man to open my ice cream because it had some stupid lid I couldn’t figure out (embarrassing!), but he said cheerily, “At least I served a purpose today!”

Having real food (yes, convenience store food counts as real food when you’ve been hiking), a bathroom, cold drinks and WiFi was heavenly. The bartender even filled up all of my water bottles gratis.

CowStep lingered, staying out of the worst heat of the day. Smart move, but I’m so slow on these hills I needed to get going after a luxurious hour at the marina.

Around the marina, the trail segues from one passage to another. Specifically, from the Superstition Wilderness to Four Peaks. Both are 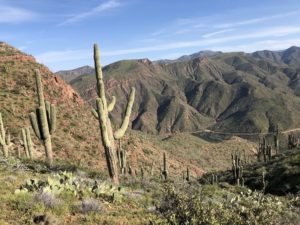 There were some savage climbs in the first few miles heading out from the marina, but then I got on top of the mountains and the last few miles were fine. Found a nice campsite just like the guide said.

A word about gates. Trails that pass through pastureland often have gates. Most are easy to operate, but some are not.

On this trail, I’ve already climbed over three that I could not open, due to tight fixtures or just not being able to figure it out (the latter was a gate with an odd counterweight system I’d never seen before).

Today I had to leave a gate open, which is a no-no. It featured my least-favorite latching system: a piece of wood that you stick into two wire loops, one at the top and one at the bottom. It’s easy to get it in the bottom loop, but sometimes the top loop is so tight you need Herculean strength to move the piece of wood close enough to slip the wire loop over it.

To make it harder, these gates have barbed wire, so you can’t use your body weight to help unless you want to get cut up. So I tried a few times, got poked and left it.

So for you ranchers out there: loosen up your darn gate latches!

Had to get that out of my system.

My son, Tim, should have landed in Phoenix as I’m writing this in my tent. He’s joining me tomorrow for a few days. Yay!!