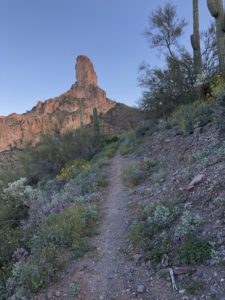 Last night, nearing Superior, should have been my first epic camping night. I had a nice spot. It wasn’t too cold or too windy. So what was the problem? My inflatable sleeping pad deflated overnight! I kept waking up feeling little rocks and such poking me. I hope it just deflated and didn’t get punctured.

So, I woke up at 5:30 – earlier than usual. I had nearly 20 miles to get to Superior, and I wanted to get there as soon as possible. I also had a monster climb the first few miles and I wanted to do it while fresh. Well, I got on the trail at 6:58 a.m. So far, so good!

I normally hike two hours, then take a break and check my mileage. Usually it will be in the five- or six-mile range. So I was shocked to see, at my first break, that my app showed I’d only hiked about three miles in two hours. That couldn’t be! Surely the satellite was off. Well, I hiked a short distance more and checked again, but it said the same thing. Then I noticed something. Something bad.

The arrow on my app, showing where I was on the trail, was pointing southbound. But I needed to be heading northbound. Immediately, I realized what had happened. About 30 minutes ago, the trail appeared to cross a huge rocky outcrop. But I lost the trail while on the big rock surface. So I opened my app, found the trail and continued on. Except I realized now I must have not paid attention to the direction of the arrow, and started hiking right back the way I’d just come.

I could have pouted or cried, but there’s no crying in hiking. I didn’t break an ankle or get bitten by a rattlesnake. I’d just lost an hour and tacked two-plus miles onto the day’s hike to Superior. C’est la vie.

This may have been the most beautiful day on the trail so far. The first few hours were sort of the same, meandering around cactus-covered 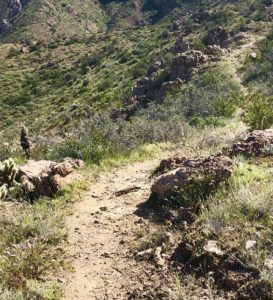 hills. But once I reached Tonto National Forest, the scenery became spectacular. There were enormous rock formations. Sweeping views. And Picketpost Mountain in the distance. And … a Gila monster!

Now, I’ve seen two rattlesnakes in the last two days. Did I really need to encounter the dangerous Gila monster on day three?! It was orange with black stripes and, luckily, just gave me a passing glance as it ambled across the path. They live underground 90 percent of the time. Most Arizonans never see them. I guess I was lucky?

While filtering water at a burbling puddle, I met two people hiking the Grand Enchantment Trail, which piggybacks on this one a bit. Then I ran across Vince again, who I’d seen twice before.

I finished my hike shortly after 4 p.m., amazing considering how the day started. It was a hard day, with lots of rocks underfoot. Ouch! I was supposed to all Al, a trail angel, to pick me up, using a phone at the site host’s camper. She wasn’t in, so I hailed some hikers who ended up driving me to Al and Mary Jo’s home. Three other hikers are staying here – Cow Step, Rambler and Rick. Because I’m the only woman, I get the bedroom. 🙂

Al drove me to the store to get supplies, and Mary Jo made a wonderful dinner for all of us. Tomorrow she’s promising waffles and lattes. This is amazing. People are wonderful.

I do love this sleeping pad, and highly recommend it. It’s lightweight, comfy and blows up in seconds.