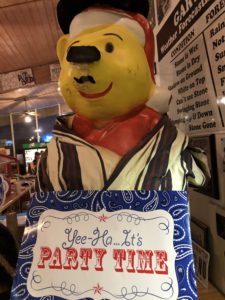 My half-day in Kearny, before gearing up to reach the Tonto National Forest, went much too quickly! Last night Diana, Amy and I had pizza at Kearny’s famous pizza joint, and we signed the hiker wall. Amy took the trail name Sherpa, due to her heavy pack, and Diana became Clarence, after the helpful angel in “It’s A Wonderful Life.”

This morning they got me to the trailhead by 7:45. It was sad to see them go! They gave me such a mental boost by their presence.

While the ladies dropped off my suitcase in Superior (Minnesota transplants here will be hosting me Thursday), I began my hike. It was a pleasant amble up and down the hills, roughly paralleling the Gila River. The wildflowers continue to be incredible.

Then, while daydreaming, I suddenly heard a rattle. A fat rattlesnake sat in the middle of the trail, its forked tongue flicking in and out. I jumped a foot and ran back several yards. It retreated, but just to the side of the path. Crap!

To the left, the land pitched down sharply amid a jumble of rocks. The right side was a rocky incline. I happened to have cell service, so I called Amy and asked what I should do. Could she Google whether I could use mace or throw rocks at it? You see, the land to the left pitched too steeply downhill to walk around the rattler. And to the right, it was also steep, although I probably could manage. But I was nervous that there would be more rattlers in the scrub.

In the end, I scrambled up the rocks to my right to hike around the snake, as that was my only option. I guess I already knew it wouldn’t be wise to further antagonize the snake. But I do not like this! Rattlers are not supposed to be seen twice in 36 hours!

This is another dry stretch. My only water source came about 16 miles in, at the Gila River. It’s flowing well, thanks to the snow I assume. It 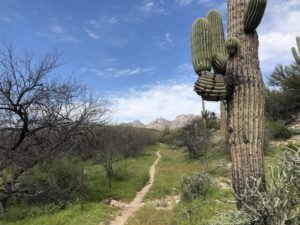 has a reputation for being muddy, and it looked that way, but it scooped up clear and filtered fine.

I normally drink a lot of water when I exercise, and this lack of it is not to my liking.

After the Gila, the path climbs a few thousand feet into Tonto National Forest. Then it gradually descends into Superior. I’d hoped to hike about 20 miles today so I just had 17 tomorrow (including the bulk of the climb), but I ended up stopping early.

This trail lately has gone through mainly steep, rocky terrain that can be impossible to camp in. I spied a site around 4 p.m. Guthook said there was a nice one 4.5 miles farther, but that would be at a higher elevation (colder and windier), plus I was zapped from the heat and sun today (and nursing my water).

So I snuggled in at 4. It feels so decadent to be done so early. But I plan an early start tomorrow. I want to make the most of my time in Superior!