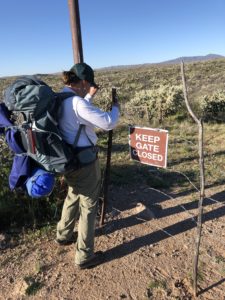 We had to endure another cold night before today’s trek to Freeman Road, an important AZT stop. We heard lots of critters while we were bunked down in our little wash, and I got nervous because I had spilled part of my dinner next to my tent. Would I be harassed by some hungry wildlife? There was an especially worrisome animal that sounded like a dog, but not really. What was out there?!

Luckily, nothing disturbed us, although that dog-like creature woke me up with its weird noise once. And so many planes were flying overhead from midnight on. Were these red-eye flights from Vegas or border patrol?

Amy and I headed out around 8. She was feeling much better overall, but her feet were trashed. She decided to get off the trail when we met Diana at Freeman Road. After making sure she was OK the first few miles, I went ahead. I needed time to resupply at the car, dump trash, get new clothes, etc.

The terrain was pretty easy, with the last two miles mainly on a dirt road. Diana had car-camped at the trailhead, and was worried about us and started driving on the dirt road. She passed me, got Amy and met me back at the trailhead. This trailhead is famous, by the way, because there’s a big, metal food storage locker that hikers stash goods at, and where trail angels leave water.

A guy named Sequoia had an RV at the Freeman Road trailhead. He had soda, water, snacks, etc. all for us hikers. How nice! He was making a hiker named Rambler a grilled cheese 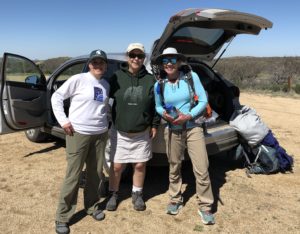 sandwich when I hiked up! I wanted one, but was too busy resupplying from the car to ask.

Twenty minutes later, I was off. The first eight miles were great. After some initial hills, it was pretty flat. I made great time. The scenery wasn’t anything special – lots of scrub – but I didn’t care. The sun was brutal, though.

Around 3:00 or so the trail got harder – lots of little, but steep, ups and downs and a rocky path. My water was running low, but I thought I was nearing a cattle tank.

Wrong! The tank was .4 miles off the trail, so nearly a mile out-and-back out of the way. I decided to camp about two miles shy of a confirmed water source. I had enough for the night and could stock up right away in the morning.

The final hour of my hike I was SO thirsty when, miraculously, I saw on my app that there was a gallon of water dropped at a trail junction yesterday that was .5 miles ahead. I busted my butt getting there, but alas it was gone.

Now, I had dropped my pack at a sweet camping spot nearby, and on my way back I heard a sound trailside and saw a HUGE snake. I think it was a rattlesnake! Ick!

Now I’m tucked in at my campsite. My tent had a chance to dry out after packing it wet this morning from the dew.

Tomorrow I finally get to go to a motel and have a shower, can wash my clothes and sleep in a real bed where it’s warm at night. I’m so excited!