I headed out from my cute B&B in Patagonia at 8:15 a.m., heading southbound toward the Canelo Hills. The first 2.7 miles were along Harshaw Road, so that was pretty easy. The temperature was forecast to be in the 70s, so I wore my favorite shorts with calf sleeves.Then the fun began as I entered Passage 3: Canelo Hills West.

The Arizona Trail, or AZT, is divided into 43 named passages, which are generally in the 15- to 25-mile range. The desert landscape was 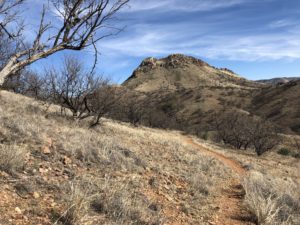 lovely, partly because it is so foreign to me. Much of this stretch featured golden hills with trees dotting them.

A trail angel named Steve was going to be caching water for me at the Canelo Hills Trailhead, among other spots. As you can imagine in a desert environment, water is scarce. Hikers often have to filter scuzzy water from cattle tanks. Although this section of Arizona got socked with several feet of snow the previous weekend, it melts very quickly here. Even newly formed streams can dry up in days. So I didn’t want to count on a plentiful water supply. If someone was willing to cache water for me, why not take advantage?

Good thing I had Steve cache that water! I was toting quite a bit – maybe 3/4 of a gallon, plus I filtered some along the way – and was just about out when I reached the trailhead and his stash. Thanks, Steve!

Passage 3 is ranked moderate-to-difficult, and it was certainly that. Lots of hills, both moderate and steep, and lots of rocky footing. I was glad I chose to wear shorts until the end of the day, when I got slightly off the trail. I saw where it was – just to my right – and decided to cut 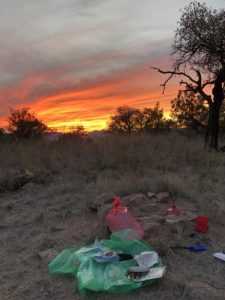 over to it instead of backtracking. The landscape was pretty much just grass, so what could be the harm? Well, there were a few thorny bushes and some gravel. And the trail was downhill from where I was. So, of course, I slipped on the gravel and slid right into a prickly bush and sliced my legs all up. Sigh.

I passed into Canelo Hills East near the end of the day. I wanted to make it to a spot called High Point on the app, because there was supposed to be a lovely campsite there. The only negative was that it was two more miles, all uphill. I did it anyway, and the campsite was worth it. The only negative is that I somehow didn’t pack my headlamp. I had it in my pack last night and took it out to go to dinner, then must have forgotten to put it back in. Rats.

P.S. Passed at least a dozen hikers going northbound today. Nice! I also saw two wildflowers. They’re supposed to be great this year because of the snow.